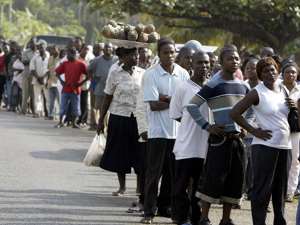 Reports from the Offinso-South Constituency of Ashanti Region where polls are underway to elect a new Member of Parliament say the three-hour-old exercise has already recorded some discomforting developments.

The Member of Parliament for the La Dadekotopon Constituency in Accra, Nii Amasah Namoale, who is serving as one of the National Democratic Congress (NDC) polling agents in the election, has been arrested for allegedly interfering with the electoral process.

Police say they are holding him till the end of the exercise at 5pm before releasing him.

The MP was picked up at the Amowi Zongo polling station after the police say he was preventing the electoral officer from performing his duties.

Namoale was said to have stood rather 'too close' to the electoral officer instead of a designated distance for all polling agents, and all entreaties to get him move away fell on deaf ears, while two other men said to be his companions keeping watch of his car have also been arrested.

The two were said to have joined the MP in preventing someone they thought did not qualify to vote from voting.

Three other people, including two girls described by former Communications Minister, Dan Botwe as obvious minors, are also being held by the police. Dan Botwe is also a former General Secretary of the New Patriotic Party.

Reports from Joy FM correspondents in the constituency say there is an overwhelming police/military presence in the constituency, while heavily built young men spotted in groups and alleged to be hirelings of some of the contesting parties are parading the streets.

The leadership of the National Democratic Congress is complaining of intimidation of the electorate by people they say are in plain clothes but claiming to be national security details.

The group allegedly arrested one Kobby Acheampong, said to be a companion of former Vice President Evans Atta Mills, NDC presidential aspirant and sent him to the District Police Headquarters but failed to prefer any charges against him so the police also set him free.

Dr. Kwabena Adjei said he had reported the activities of the group claiming to be security operatives to the regular police for redress.

The Offinso South parliamentary seat became vacant following the death of the former MP, Kwabena Sarfo in August. He was buried at the weekend.

Four candidates are vying for the seat – the NPP's Dr. Achaw Duah, a medical practitioner and the NDC's 32-year-old law student, Barbara Asamoah.

Ms. Doris Appiah is standing on the ticket of the Democratic People's Party (DPP) whilst Emmanuel Kwesi Addai is an independent candidate.

Electoral materials and logistics were provided in time, for the election to get off at the 7am appointed time.

We haven’t rejected Justices Gaewu and Koomson – Appointment...
57 minutes ago

Stop the wrongful, multiple sale of lands — Akufo-Addo to ch...
57 minutes ago