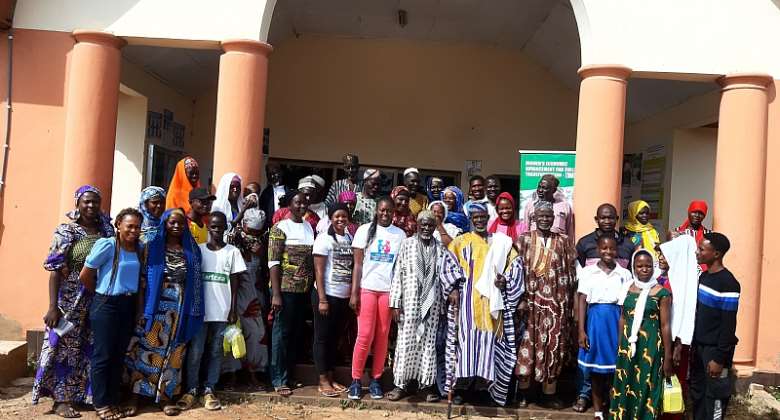 SNG Team, stakeholders and the beneficiaries

Shea Network Ghana (SNG), a leading nongovernmental organisation in the promotion of the shea business in Ghana, has held a Gender Model Family (GMF) summit in the Mion District of the Northern Region to encourage men to be supportive of their spouses in domestic chores and other economic activities.

The one-day summit held on Monday, November 7, 2022, at the Mion District Assembly was organised by the Shea Network Ghana in partnership with OXFAM and SEND GHANA, funded by Global Affairs Canada.

It was attended by traditional and religious leaders, governmental agencies, Teachers, students, GMF ambassadors, and GMF families, among others.

A project Officer in charge of the GMF at the Shea Network Ghana, Saani Sharifdeen addressing the summit said the Gender Model Family was a transformative approach to community mobilisation that seeks to address the unequal power relations between women and men and also promote a longer-term transformation of harmful gender norms.

He also said the GMF was initiated to create an environment of fair division of labour, strong family bonds between a wife, husband and children, better access to family resources by women and children, and more consultative and joint decision-making for families.

Mr Sharifdeen indicated that the GMF has a target of seven hundred and twenty (720) beneficiaries out of which the SNG was working with 120 families.

He was optimistic that the GMF would enable husbands and wives to live in an equitable and just manner for enhanced economic growth and development for women, children and the youth in society.

The Chief of Salankpang, Naa Issah Alhassan, in his comments, expressed gratitude to the SNG and its partners for choosing the community to implement the project.

In her submissions, a representative of the Social Welfare and Community Development office at the Mion District Assembly, Madam Angelica Gyogluu, urged men to be supportive of their spouses, children and families

She also called on parents to live responsible lives worthy of emulation by children so that they can grow up and become better future leaders.

The Women In Agriculture Development Officer (WIAD) for the Mion District Madam Bashiru Halimatu Sadia, on her part, appealed to fathers not to leave the care of the girl child in the hands of only mothers.

On his part, the Head Teacher of the Salankpang Primary School, Mr Alidu Bukari Zakaria in remarks, lauded the GMF project and called for its expansion beyond the families to school to help change the perception of gender at the schools.

GMF uses several strategies including drama, community sensitization, radio discussions stakeholders' engagement to change the thinking of society on the role of women in domestic chores and economic activities.

The program is implemented in 8 communities from 4 Districts in four regions: Northern, Savannah, Upper East and Upper West.

Shea Network Ghana (SNG) is a multi-stakeholder non-profit organization with members at all levels of the shea value chain in Ghana.

SNG seeks to influence policy and provide solutions to industry-wide challenges for a growing and coordinated shea sector.