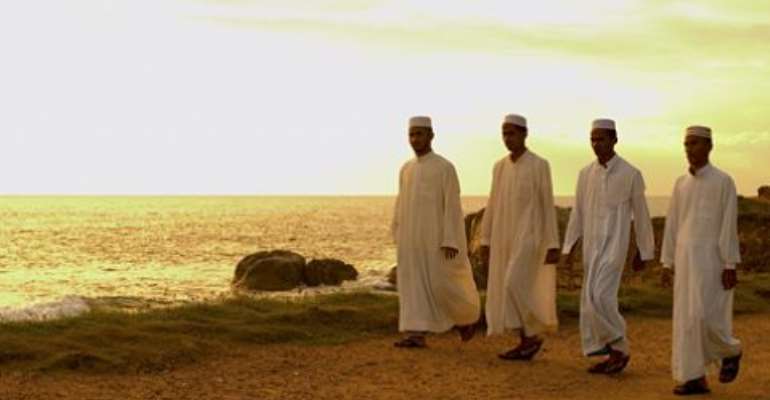 Accra, Oct. 23, GNA - Vice President Aliu Mahama on Monday asked Muslims to place premium on tolerance, which he said was an Islamic virtue but rarely demonstrated in some Muslim communities to facilitate conflict resolution.

"More often than not, we receive and read reports of upsurge in intra- Muslim communities... We endeavour to purge ourselves of the perception that Muslims are violent people. This is far from the truth." Vice President Alhaji Mahama was addressing hundreds of Muslims who converged at the Independence Square to offer special prayers as part of the Eid-Ul-Fitr festival that marks the end of 30 days of the Holy Ramadan (fast).

He told his fellow worshippers who surged closer to the dais immediately after their 20 minutes of prayer and meditation, to listen to his speech, that Muslims could create a positive image for themselves by taking advantage of the spiritual purification and renewal they underwent through the fasting to carry out self- evaluation. Vice President Alhaji Mahama expressed the hope that the Ramadan period would insulate Muslims from the old habits of wrong-doing and other forms of human failings.

"To this end, let us rededicate ourselves to the study of the teachings of the Holy Prophet and be guided at all times by the spiritual values and moral precepts he so passionately advocated. "When we are able to do this, peace, social justice, tolerance and equity will prevail in Muslim communities and the country at large," he added.

Vice President Alhaji Mahama called on Muslims to embrace Government education policies such as the Capitation Grant and the School Feeding Programme to send their children to school instead of falling vulnerable to the machinations of politicians and economic mercenaries who exploit them for their selfish motives.

"I sincerely believe that we can give a positive image to ourselves as Muslims and to the religion through secular education. This type of education liberates the mind and enables one to appreciate and understand the viewpoint of others without necessarily adopting such views."

Vice President Alhaji Mahama appealed to the citizenry not to take the peace the country was enjoying for granted, explaining that the devastation of war and its attendant instability should be a constant reminder to every Ghanaian to preserve national security.

"Let me take this opportunity to urge all Muslims as well as our other compatriots to choose the path of peace for national development. For us Muslims we need to be constantly reminded that Islam and peace are considered synonymous."

Sheikh Nuhu Sharabutu, National Chief Imam, who led the special prayers called on Muslims to see the Eid-Ul-Fitr as an opportunity to practice the virtues of nobility and human dignity. They should also forge unity of purpose and desist from factional conflicts.

Alhaji Gado Muhammed, a Muslim leader, said armed robbery and other crimes associated with the youth were reflections that their aspirations in life had not been fulfilled.

He therefore called on the political authorities to initiate projects that would engage the youth in productive ventures.