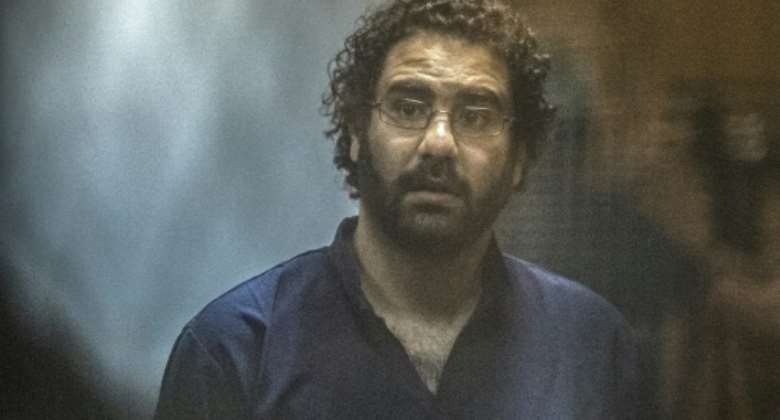 Abdel Fattah -- a major figure in the 2011 revolt that toppled longtime president Hosni Mubarak -- is currently serving a five-year sentence for 'broadcasting false news' after having already spent much of the past decade behind bars. By Khaled DESOUKI (AFP/File)

The possible death of jailed British-Egyptian dissident Alaa Abdel Fattah in prison is "in no one's interest", his sister Sanaa Seif said, nearly two days after he started refusing water.

Following a seven-month hunger strike during which he only had 100 calories per day, Abdel Fattah stopped drinking water on Sunday to coincide with the opening of the United Nations COP27 climate summit in Egypt.

Widely considered Egypt's best-known dissident, he has been sentenced to five years in prison for "spreading false news", having already spent the better part of the past decade behind bars.

"We are talking about an innocent man who has unjustly spent nine years in prison," Seif said from the climate summit in the Red Sea resort of Sharm el-Sheikh, where she travelled to appeal to world leaders to press for his release.

Seif, her sister Mona, her mother Laila Soueif and her aunt, celebrated novelist Adhaf Soueif, have campaigned worldwide for the release of the activist, who gained British citizenship through his UK-born mother in April.

"We need sensible people to intervene," Seif said in an interview with AFP. "I put my hopes in the British delegation because as his sister, I can't give up or tell myself that my brother will die."

She acknowledged the risk of travelling to Sharm el-Sheikh, with its heavy security restrictions, saying: "I admit, I was afraid to come."

"But it's our last resort," she said.

"I came so that Alaa wouldn't be forgotten. I want to remind both Egyptian and British officials that my presence means that someone is dying and that it's possible to save him."

Sunak said he "hoped to see this resolved as soon as possible and would continue to press for progress", the spokesperson said.

Amnesty International chief Agnes Callamard on Sunday warned that "there is not a lot of time -- 72 hours at best," referring to Abdel Fattah's possible remaining lifespan.

But Egyptian Foreign Minister Sameh Shoukry assured that the dissident "benefits from all necessary care in prison", in an interview with CNBC Monday.

Seif nonetheless warned that "the way his case is handled only accelerates the destabilisation of the regime".

She accused Egypt of using the COP27 summit to "erase its bad reputation in terms of human rights".

But despite clampdowns, Abdel Fattah's cause has been championed by activists, artists, rights defenders and politicians -- including the French president -- during the summit.

Protesters gathered near the British embassy in the Lebanese capital Beirut to demand Abdel Fattah's release. By ANWAR AMRO (AFP)

France's Emmanuel Macron on Monday said he received an assurance from Sisi that the Egyptian president was "committed to ensuring that (the) health of Alaa Abdel Fattah is preserved".

It came as concern continued to grow over his condition.

On Monday morning, "my mother went to wait outside the prison to check on him after 24 hours without water," Seif said.

By evening, she still had not received word from her son, nor had she been able to deliver the clothes and books she drops off to him every week.

"The ball is in the politicians' court, it is up to them to do their job," Seif continued.

"We continue the fight and we must not lose hope."

Being an MP is serious business; the responsibility of a Min...
6 minutes ago