Biden and Trump in an indirect race to the White House 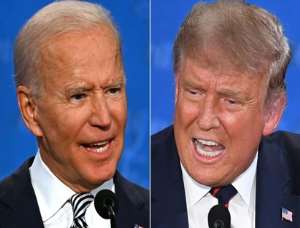 A careful consideration of data points to the fact that, the first midterm election after a new president is elected is won by the opposition party. And I wouldn't be all that surprised if that should happen even though it doesn't augur well for the democracy of the US.

In 2022 of this year, Republicans who believe the 2020 election was fraudulent have their first chance to go to the polls and have their votes speak for them. There is no argument about the fact that Republicans will turn out heavily, emotionally charged to vent their spleen on President Joe Biden through November 8 midterms. Some GOP hardliners still believe that Biden isn't the president but Trump is. So you could imagine their turnout for this election – exceedingly beyond the word "turnout".

This midterms is also the first chance the American people will have to make their views heard with all the post-covid frustrations by transferring their aggression on Biden's administration. Aside that immigration issues will play a part and all the related events thereto.

So analysts think it will be worse for Biden than it has been for most presidents at this point in their careers, though Biden himself is convinced the Democrats will do really well.

However, a coordinated campaign can turn things around. Barack Obama should continue to keep the flame burning in support of the Democrats as he's currently doing. This election is a walk in flames or a walk to strengthen US democracy.

*Trump & Biden in battle for Georgia

The victory of Democrats in Georgia in the previous election was a significant flip that the government of President Joe Biden needed enormously to have a bit of relief. It did pay off for him. The question is: Is Georgia gonna hold the torch again in few days time?

This contest is something to look out for as the Republican candidate for U.S. Senate Herschel Walker and U.S. Sen. Raphael Warnock battle it out in Georgia. Herschel, a former football great, recruited and endorsed by former President Donald Trump, is hoping to make a mark for his boss and former President, Donald Trump. However, some approval rating points to the dimension of Herschel currently running neck-and-neck with Warnock.

From where I sit, I see Reverend Raphael Warnock emerging victorious with a slide margin; and if that doesn't happen, then I anticipate the contest been decided in a December 6 runoff.