CSIR, National Biodiversity Authority holds a forum on food and economy in Tamale 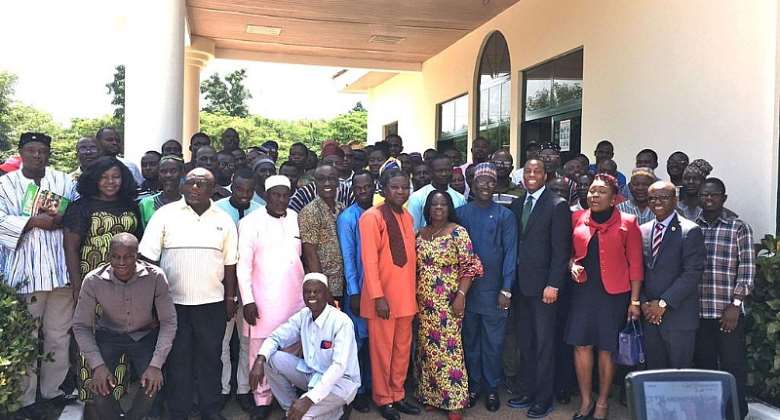 The Council for Scientific and Industrial Research (CSIR) in partnership with the United States Department of Agriculture and the National Biosafety Authority of Ghana, has organised a workshop on food and the economy.

The one-day forum dubbed "U.S -Ghana Innovation For Food And Economy Workshop" was organised by the CSIR and supported by the U. S Embassy and was part of the five-year Feed the Future Country Plan for Ghana that will increase investments in agriculture, build greater resilience, and improve household nutrition.

It was held at the University for Development Studies(UDS) last Wednesday in Tamale.

The forum was attended by the United States Embassy in Ghana, the National Biodiversity Authority, the Centre for Scientific and Industrial Research(CSIR), Ministry of Environment, Science, Technology and Innovation, among others as part of activities to develop and implement a strategy that fosters dialogue and results in the elimination of all negative perceptions about biotechnology.

On September 5, 2019, the governments of the United States of America and the Republic of Ghana signed a Declaration of Partnership at the African Green Revolution Forum hosted in Accra.

The Declaration launched a five-year Feed the Future Country Plan for Ghana that will increase investments in agriculture, build greater resilience, and improve household nutrition.

Feed the Future is the U.S. Government’s global hunger and food security initiative, bringing together investments from 11 U.S. Government agencies to help accelerate Ghana’s journey to self-reliance through agriculture, trade, and policy reforms.

Under the September 5, 2019 declaration, the two nations aligned their priorities for investments in food security, trade, and nutrition in Ghana, in the Northern, North East, Upper East, and Upper West regions, and coastal fishing zones.

In many African and developing countries including Ghana, due to a lack of understanding of biotechnological applications and the nature of the products derived from them, products developed using the technology have been the subject of controversy and negative public perception.

According to research, population increase has become a threat to food sufficiency as the increased numbers of the global population continue to shrink the size of farmlands.

Also, the global population has been estimated to hit 9.9 billion by 2050 of which Africa’s share is 2.5 billion as the continent experiences high birthrates.

The onslaught of challenges, therefore, requires that farming is guided to make the most out of research and smaller farm holdings to be able to feed populations and for economic gain.

The one-day forum was therefore held to engage and educate research scientists, farmers and media in Ghana on improved agricultural methods.

In his submissions during the forum, the Economic Associate of the US Embassy, Easton Reid said the United States identifies agriculture where Ghana and Africa were naturally endowed as the foundational block and the basic tool for fighting poverty.

He also said the UN Sustainable Development goal two, which aims at stamping out hunger by 2030 and others were racing against time to meet the targets but added that unfolding natural conditions such as drought and inadequate rainfall, continue to pose challenges to those quests.

He further indicated that across many parts of the globe, the demand for food was high, and ensuring that every human being had access to sufficient food required that yields of crops were maintained above current levels.

"Achieving this in the face of climate variability, soil degradation and the increased incidence of pests and diseases requires the development of improved and better-adapted crops" he stated

The Director General of the Council for Scientific and Industrial Research, CSIR, Prof. Paul Bosu, in his remarks, noted that though Ghanaians were against the consumption of GM foods, he believed it was already consumed in the country.

He also urged Ghanaians to accept GM Foods assuring that it was safer and well-regulated than conventional foods.

"For many decades, biotechnology has proven to be a reliable technology for breeding plants with desirable adaptation and utilization traits," he said.

On his part, the Executive Director of the National Biosafety Authority, Mr Eric Okoree assured Ghanaians that his outfit was doing its best to ensure that all GM products were well regulated.

He added that the National Biosafety Authority was working tirelessly to safeguard the country's biodiversity space.

The Chief Director of the Ministry of Environment, Science, Technology and Innovation Mrs Cynthia Asare-Bediako, on her part, pledged the support of the ministry to the development, protection and promotion of technology as well as innovation in Ghana.

In the picture below is Mrs Cynthia Asare-Bediako, middle in the front line (Chief Director of the Ministry of Environment, Science, Technology and Innovation), and Professor Easton Reid 3rd from right (Economic Associate of the US Embassy) and other participants at the forum