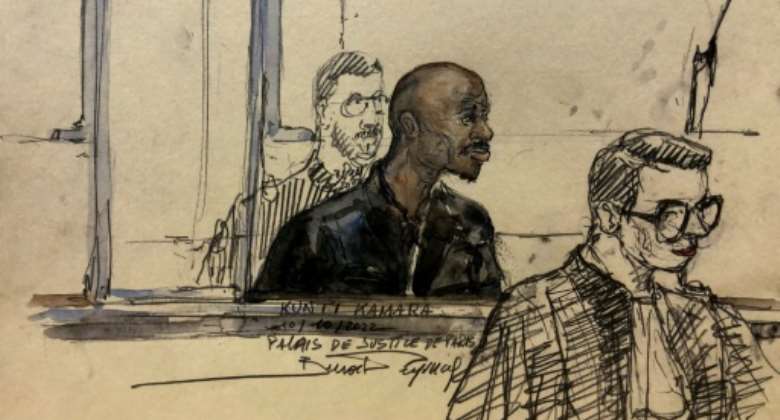 The case was brought by the crimes against humanity division of the Paris court. By Benoit PEYRUCQ (AFP/File)

A Paris court on Wednesday sentenced a former Liberian rebel commander to life in jail for violence against civilians and complicity in crimes against humanity after France's first trial linked to Liberia's civil wars.

The criminal court found Kunti Kamara guilty of crimes against civilians between 1993 and 1994, including a teacher whose heart he reportedly ate, and not preventing soldiers under his command from repeatedly raping two teenage girls.

The 47-year-old defendant betrayed little emotion when the verdict was pronounced.

The allegations against Kamara date back to the early years of the back-to-back conflicts that would ultimately kill 250,000 people in the West African nation between 1989 and 2003.

The fighting was marked by mass murders, rape and mutilations, in many cases by child soldiers conscripted by warlords, with atrocities against civilians common.

Kamara was a regional commander of the United Liberation Movement of Liberia for Democracy (ULIMO), a rebel group that fought the National Patriotic Front of ex-president Charles Taylor.

"We hope that all those who were perpetrators of savage brutality will have their days in court without exception," he told AFP.

Siah Tamba, 37, saw her father gunned down during the conflicts.

"Every day when I get up, I pray that one day the killers of my father will also be judged," she told AFP in the Liberian capital.

The case was brought by the crimes against humanity division of the Paris court after Kamara was arrested in France in 2018.

It was set up in 2012 to try suspected perpetrators of war crimes, crimes against humanity and genocide detained on French soil, irrespective of where their alleged crimes were committed.

This is the first case taken by the unit that is not related to the 1994 Rwanda genocide.

The prosecution had sought a life sentence against Kamara during the three-week trial, which involved witnesses who came from Liberia.

Kamara consistently denied the allegations, with his defence team questioning the trustworthiness of the evidence against him.

Prosecutors had also accused Kamara of executing civilians and organising forced marches, describing ULIMO's control of Lofa county in northwestern Liberia in the 1990s as a "governance by terror".

Prosecution lawyer Aurelie Belliot told the court of public executions and the distribution of human flesh and intestines used to mark checkpoints.

A truth and reconciliation commission was set up in 2006 to probe crimes committed during the fighting, but its recommendations, published in 2009, have remained largely unimplemented in the name of keeping the peace.

Kamara was a regional commander of the United Liberation Movement of Liberia for Democracy. By Alain BOMMENEL (AFP)

And many warlords who were incriminated are still considered heroes in their communities.

So far only a handful of people have been convicted in Liberia itself for their part in the conflict, and efforts to establish a war crimes court in the country have stalled.

Former Liberian warlord-turned-president Taylor was imprisoned in 2012, but for war crimes committed in neighbouring Sierra Leone, not in his own country, where he also rampaged.

Other former participants in the Liberian wars have been tried abroad in recent years.