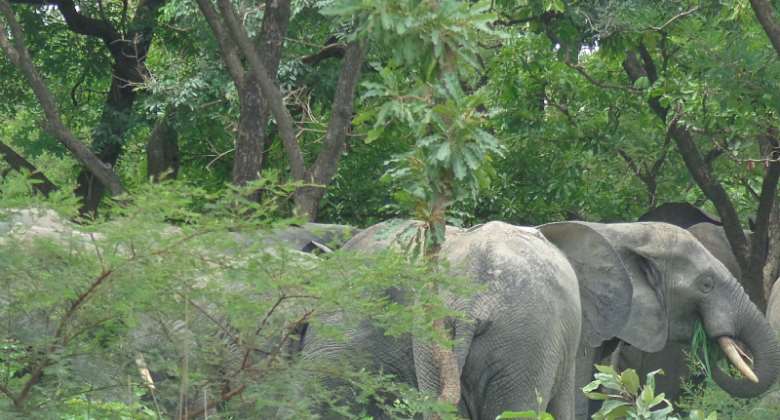 As part of measures put in place by the traditional authorities of Nabdam in collaboration with the Nabdam District Assembly as well as Queros Gualvao, the contractor working on the Bolgatanga-Bawku highway, the three partners agreed to erect beehives among other measures along the Wildlife Eastern Corridor stretch that serves as the pathway for the elephants aimed at preventing the annual invasion by these stone pieces.

This incident left many farmers still honouring their loan obligations contracted from banks to farm during the last farming season as a result of a number of elephant invasions experienced by the farmers during the last harvesting season in particular.

The Paramount Chief of the Sakote Traditional Area, Naba Sigri Bewong who disclosed this in an interview with ModernGhana News at his palace in Sakote added that the move was sponsored by the contractor as part of its corporate social responsibilities to the people of the area to enable them benefit from their yearly labour.

Having agreed to handle the cost of manufacturing the beehives that will stand the test of time, Naba Sigri Bewong also stated that the contractor suggested if the traditional authorities of the area could form what is called Community Resource Management Committee (CRMC) to be responsible in the management and maintenance of the beehive for the benefit of members of the stretch.

Members of this committee according to the Paramount Chief, should be made of the Traditional Ruler, Unit Committee Member, three Assembly Members, a Queen Mother, a member of the Charcoal Burners Association, Youth Leader of the community, a fisherman and a Fulani herdsman.

Other measures employed aside the establishment of the beehives included the flashed lightening system in the night by some community volunteers during harvesting as well as the tying of nylon ropes around the farms on which farmers tie white rubbers. It makes noise anytime the wind blows to drive them away since elephants dislike noisy environments.