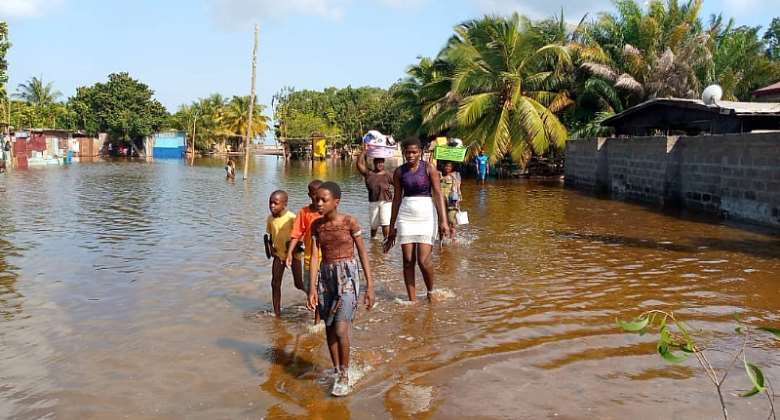 Ghanaian youth are urging world leaders to focus on loss and damage ahead of the 27th Conference of Parties on Climate Change in Sharm El Sheikh, Egypt.

The Strategic Youth Network for Development (SYND) conveners of Youth in Natural Resources and Environmental Governance (Youth-NREG) platform, demands leaders of the Global North pay for the harm caused by anthropogenic climate change in vulnerable countries.

Climate change is expected to cost developing countries $290 billion to $580 billion per year by 2030, and up to $1 trillion by 2050, affecting the lowest emitters the most.

SYND outlined five demands in a document that was the result of a four-month monthly webinar with young people across the country, including the creation of a financial facility to assist developing countries with loss and damage.

"Parties must establish a Loss and Damage facility with significant funding from the Global North to highly vulnerable countries facing mass destruction as a result of the climate crisis," the group stated.

In Ghana, climate change has influenced rain patterns and rising sea levels, which are increasingly affecting areas that traditionally are not prone to floods, for example, Accra the capital region has seen heavy flooding in recent times.

Increasing temperatures also have an impact on local farmers as it takes a long time to rain, and when it does, it is often accompanied by storms, which destroy farm produce and properties.

The other demands are;

▪️The United Nations Environment Program (UNEP) Adaptation Gap report found that the annual adaptation costs in developing countries alone are estimated at USD70 billion. This figure is expected to reach USD140-300 billion in 2030 and USD280-500 billion in 2050. Therefore an increase in financing will be critical for countries to meet their adaptation goals. On this score, we are calling on leaders from the Global North to fulfill their pledges in the Glasgow Climate Pact to increase funding for climate adaptation especially for climate vulnerable countries.

▪️Comimmt to increasing support for young people to participate in Global Climate Change discourse. We congratulate countries like Ghana for implementing some of the outcomes of the Glasgow Work Programme on Action for Climate Empowerment (ACE) by commencing various youth negotiators programs. We therefore call for more support in terms of financial and capacity resources to ensure young people particularly from the global south are not left out of the global climate change discourse like the COP and other Subsidiary body meetings.

▪️Decisions made at COP27 must address the social, geographical and economic injustices surrounding the global energy transition conversation. Leaders from the global north must be held accountable for going back to issuing new deals on fossil fuel exploration after all the pledges made at COP26. A clear roadmap of how least emitting yet highly vulnerable countries can transition to depend only on clean energy sources for development, needs to be discussed and adopted.