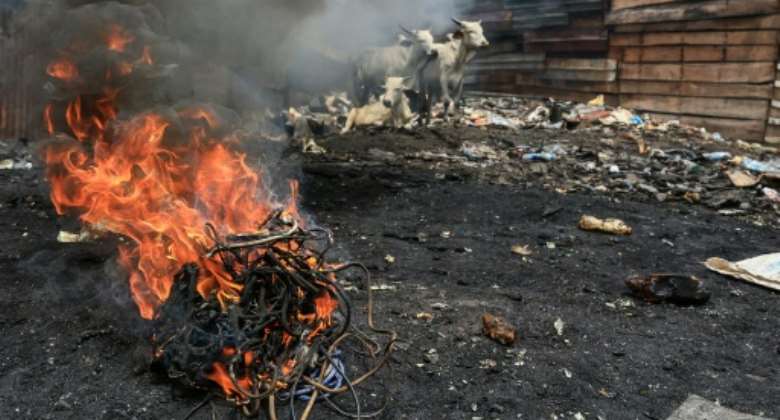 Unlicensed recycling in Yaounde -- electrical cables are burnt in a rubbish bin to recover copper, which is then sold. By Daniel Beloumou Olomo (AFP)

Sheltered from the harsh central African sun by a patched-up parasol, Ismael Alioum rummages through piles of electronic waste, gleaning useful components and high-value metals from circuit boards and switches.

The scrap-metal district of Yaounde, the capital of Cameroon, is in full swing as artisanal workers scavenge through discarded items and sell their harvest to traders, often Chinese or Indians.

But the work can also carry an untold human and environmental cost.

No gloves or masks are in sight as Alioum, 46, bashes away at an old voltage regulator. Near him, three younger men are attacking other old devices with screwdrivers and knives.

"Electronic waste contains harmful substances that can cause diseases such as cancer in humans when they are released into the environment," said Didier Yimkoua, head of a campaign group called World Action Phyto Protection.

"When scrap metal workers break cathode ray tubes, mercury or lead can leak -- it's dangerous for them and for the public at large."

Unlicensed recyclers "take what's useful and toss out the rest, including items that are toxic for the environment," said Armel Poughela, director of Solidarite Technologique, an NGO that works in licensed processing of e-waste.

Yannick Ayi, a technician working for Solidarite Technologique, with a batch of cathode-ray tubes taken from broken TVs. By Daniel Beloumou Olomo (AFP)

A decade ago, Cameroon passed a law requiring greener and safer standards for disposing of e-waste, blazing a trail as concern mounted that Africa was becoming the world's dumping ground for toxic rubbish.

Founded in 2011, Solidarite became one of the first recycling groups to be approved under the law.

It goes around collecting broken gadgets from companies and households "to prevent the waste from ending up in the trash," explained Augustin Kenne, in charge of dismantling.

Collections are made by appointment now that word has got around, said employee Camille Ndomo, loading his tricycle with a gas burner, an LCD screen and a landline telephone recovered from a home in the city's eastern Ewonkan district.

At the organisation's headquarters, the items are then sorted, washed and dismantled by a dozen staff members equipped with gloves and masks.

Shells of dismantled TV sets at Solidarite Technologique. Parts are sorted and cleaned, then recycled if possible -- if not, they are responsibly destroyed. By Daniel Beloumou Olomo (AFP)

Repairable items are fixed and sold in their shop.

Waste that the NGO cannot repair or properly dispose of at its site is taken to specialists in Douala, the economic capital, or if need be to Europe where expertise in the field is more developed.

"Over the past three years, we have been collecting 130 tonnes of waste annually, on average," said Poughela.

Of this, "about 50 tonnes" is "revalued" — meaning reused — or disposed of at the Yaounde site.

Poughela said Cameroon was the first African country to have passed legislation on e-waste management.

Despite this important legal step, recycling rates in Senegal are low, Poughela said. No data are available to provide a more accurate picture.

Rehabilated products are sold in Solidarite Technologique's shop. A 10-year-old law in Cameroon encourages responsible recycling but takeup is poor, as the business is unprofitable. By Daniel Beloumou Olomo (AFP)

Out of 25 operators who have gained a licence, only two are active, and the field remains dominated by informal workers, who typically are untrained -- they "learn on the job," in Alioum's words.

Poughela said that on current volume scales, the business was unprofitable, mainly because of infrastructure problems.

"To cover costs, we would have to achieve processing volumes of 5,000 tonnes per year," Poughela said.

The NGO plans to build a site to crush and safely incinerate waste that cannot be recycled.

"We have obtained a one-hectare (2.57-acre) site in Douala, but we don't have the funding," Poughela said.