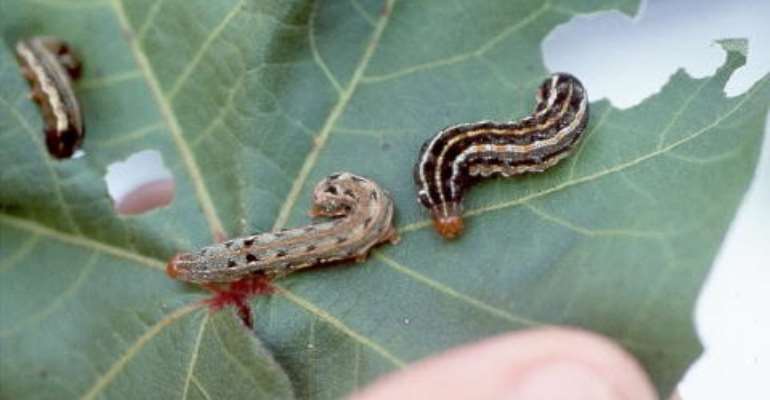 Destructive insects (Armyworms) have attacked over nine districts in the Brong Ahafo Region, which is distinguished as the country's major producer of food crops. The caterpillars, according to reports, are dominant in the transitional zones of the Region and feed on the grass family of vegetation like maize.
An acre of maize farm could be destroyed within 24 hours by these caterpillars due to their highly effective digestive system. The digestive system of the armyworm is so effectual that it emits the unwanted waste from its system even whilst eating; hence it has no time-out when eating.

The Nkoranza Distict was the first to report the outbreak at the regional office of the Ministry of Food and Agriculature (MOFA) when maize farmers whinth the area complained to the disatrict office on Wednesday, october 4 this year.

Other districtsin the region reported to have been under attack include Berekum, techiman, Kintampo South, Tain, Wenchi, Jaman, Sunyani and Atebubu/Aanten.

It has also been reported that other areas like Ejura and Mampong int eh Asanti region as well as Akosombo were also involved.

The MOFA District Director of Nkoranza, Dr Kofi Afakye, disclosed that out of the total 44 thousand acres of maize cultiviated in the district during the minor season, 20% - that is 8,800 acres – of it has been affected, whilst 10% (880) were completely damaged.

Dr Afakye said MOFA liased with NADMO to inform the District Chief Executive about the outbreak and brainstorm on how best the canker could be tackled.