Do Nigerians Trust the Police in the Face of Foreign Government Security Alerts? 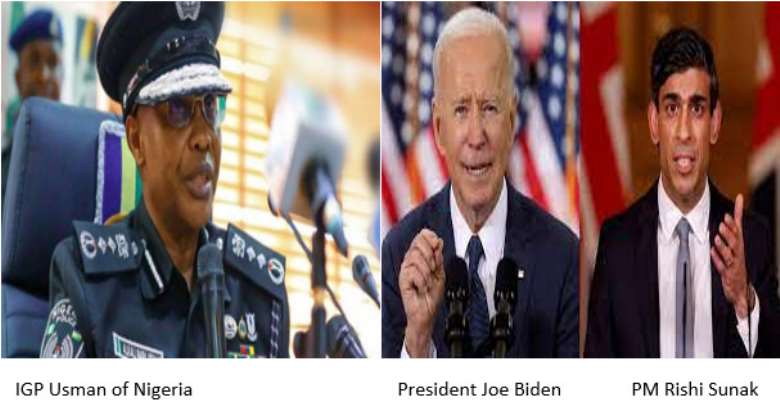 In a recent headline in the media, titled "Give Security, Terror Alerts To Police, Not General Public – Inspector-General Tells Foreign Governments", it appears that the Nigerian Inspector-General of Police, Baba Usman, was especially referring to the U.S. and U.K. terror alerts about possible attacks in Nigeria’s capital city, Abuja.

The United States, United Kingdom, Canada, Ireland, Australia, and other foreign governments had released security alert, warning their citizens to steer clear of Abuja because of planned terrorist attack.

In fact, US gave orders to families of embassy employees to depart Nigeria due to heightened risk of terrorism in Abuja and possibly across the country.

Major Abuja malls and other popular stores and a multinational construction company, Julius Berger, has closed its operations in Nigeria.

In a typical emotional reactive way, the Nigerian Police have described the alarm raised by the United States, United Kingdom, Canada and other countries over security alerts on elevated risk of terror attacks in Abuja as a conspiracy.

The Inspector General of Police (IGP), Alkali Baba Usman, went further in an apparent sensitive manner accused the US, UK, Canada, and others of raising security alerts met to bring Nigeria down.

In fact, Usman, who spoke in Ibusa, Oshimili North local government area of Delta State, during the commissioning of modern police station/barracks, in an apparent irritated tone warned the generally known struggling and ill-treated media to avoid being used as agents of transmitting fake and unreliable news that can bring the nation down.

This is the same man who said he was not informed of the terror alert by the United States, United Kingdom, Canada, and other countries, so how does he know it is “fake news”?

Usman is forgetting one thing about foreign governments and what they know about the Nigerian police especially in recent times. They read and listen the local news, they hear from the people.

In fact, as a result of the Nigeria Police Force (NPF) with its chronic and entrenched institutional and public troubles marked with poor integrity and conflict with other law enforcement bodies like the Economic and Financial Crimes Commission (EFCC) and the Nigeria Security and Civil Defence, and complicated by the reality that many Nigerians don’t trust the police, do not also see police officers as their friends, how does one expect Oyibo or foreign establishment to trust the NPF?

Across the nation, the eyes of public trust and legitimacy regarding the police remain marked with distrust.

Police-public relations in Nigeria has been marred by issues of mistrust, deep scepticism, lack of trust, and ineffectiveness.

So now we see why, to use Usman’s own words, why (they foreign governments) “enter the country and said there is security alert, …didn’t inform police, and …go around telling your people…”

To further use Usman’s words, now we all see why they (they foreign governments) have “…information on security (took it) …to the public.’

The Nigerian people should ignore the apparent emotional responses from the likes of Usman and chatty Minister of Information and Culture, Lai Mohammed but press on the police and other law enforcement and security outfits to take this security seriously.

And the known psychology of living in denial by the police especially which have made them not able to meet the mark in terms of their failed responses to repeated threats and known attacks across the country should be questioned by all.

With the coming of a new admiration, possibly that of Obi, Tinubu, or Atiku, and quick decentralization of the current irregular Nigerian Police Force and instituting of State police systems with a new look of professionalism, accountability, and lack of unfettered corruption, mismanagement, and human rights abuse, the public and foreigners' reliability could increase. With a focus on prevention tactics and a concern for general safety and security information, public and foreign establishment trust and reliability will grow.