Like Obama of Africa was to America, Sunak is UK’s first African PM. Remembering the heinous legacy of slavery and colonization? 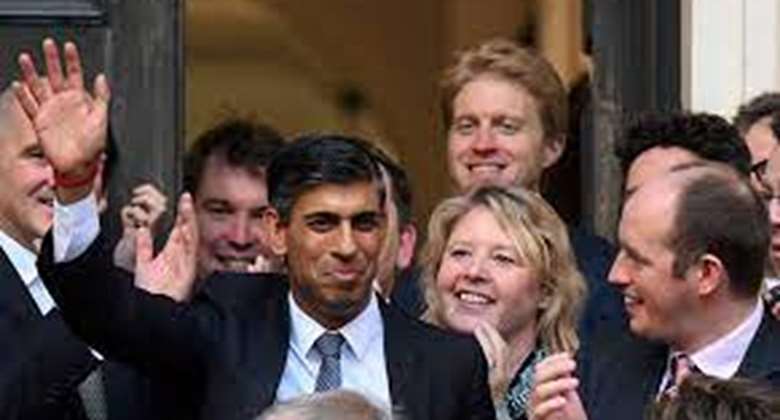 Rishi Sunak, the first person of African Heritage to be Britain's prime minister

The African descendants of British North American slaves and colonists are overjoyed at the extraordinary rise of a grandson of African soil.

The current installation of Rishi Sunak as British prime minister and the past election of Barack Obama as President of the United States by mostly white people of European descent is remarkable.

The British North American slavers and colonizers of Africans more than 150 years ago, and the rise of Sunak could be seen as a type of psychological reparation for slavery and colonization.

It has been said that the slavery and colonization of black Africans were Britain’s and America’s original sins, when Africans were treated as non-humans, used as 'chattels' to be worked to death.

Through the institutions of slavery and colonization, the world saw how Britain and America had absolute authority to control black bodies—and regulate black behavior.

For hundreds of years, and up to this day, it is hard to comprehend the inhumanity that characterized these acts. It is tough to discuss the violence that was used to sustain these acts. Many Africans on their way to Britain and America in the Atlantic Ocean died painfully, mostly of hunger, heat, and disease, while millions apparently wound up in the stomachs of aquatic animals. The ideology of white supremacy that justified slavery and colonization is still felt today.

Through slavery and the colonization of African bodies, minds, and resources came the growth of American industries and agriculture, and British industrial and economic maturation.

Up to this day, Britain and the United States have yet to compensate descendants of enslaved and colonized Africans for their forced uprooting, labor, cruelty, trauma, pain, and various manifestations of conflict.

I, for one, do not believe that there is any amount of money that can be used to fully compensate the offspring of enslaved and colonized blacks for their forced labor and traumatic sufferings, as well as the never-ending racial prejudice of all forms, which combine to form what I call grand stupidity, which results from one group protecting their freedom and liberty at the expense of discriminating against others, such as black people.

We must recognize that disparities in access to full institutional inclusion along with inequities in economic policies combine to make black people more susceptible to negative consequences than white individuals.

With the above odd and painful or lingering backgrounds in mind, we all need to find a way to celebrate, like in the case of Obama, Sunak's appointment was a sign of racial progress.

For the descendants of millions of blacks who were shipped in chains from Africa, "America (and Britain) has a genetic birth defect when it comes to the question of race," as once stated by U.S. Representative Hakeem Jeffries.

Whether whites like it or not, they must always ask in their mind how to atone for this defect, and compensation or reparation of all types for blacks is always part of the healing and reconciliation process. I dare say this move in regard to Sunak somewhat represents one of millions of actual chains of slavery and colonization as Sunak was installed to become its first African Prime Minister.

Dr. Martin Luther King, Jr.'s often quoted "I Have a Dream Speech" that he gave in 1963 in Washington, is partly a manifestation of Sunak becoming the UK's first non-white prime minister.

As it is now known, Sunak’s father, Yashvir Sunak, was born and raised in Kenya, while his mother, Usha Sunak, was born in Tanzania, then called Tanganyika. His grandparents were born in Punjab, India and emigrated to East Africa.

His parents got an opportunity to move from East Africa with their families to the UK in the 1960s.

Sunak, 42, was born and educated in the United Kingdom, where he worked hard, rose through the ranks of business and politics, served as UK Treasury chief, became Conservative Party leader, and is now Prime Minister.

Today, Asians, especially Indians, and Africans, especially Kenyans/Tanzanians, are expressing pride in the new British Prime Minister, who openly embraced his Indian and Hindu heritage some days ago.

Let us hope, as “proud Hindu," he equally embraces his immediate African cultural heritage, especially the place of birth of his parents.

As the UK's first British African prime minister, many in Africa are delighted in Sunak's rise in Britain, a former home of enslaved and colonized Africans, but we must see this rise as only symbolic.

It was not long ago that Donald Trump, the former American President, who like Sunak is a far right or conservative politician, once tagged some African states as "s******* countries." We hope Sunak does not see Africa as "Shit H***".

Sunak, as part of his drastic African policy, should launch major criminal justice moves regarding tens of millions of pounds stolen from Africa, primarily by politicians, and ensure that they are prosecuted and convicted of looting in Britain.

Let’s hope Sunak shows interest in Africa in terms of meaningful foreign policies, does not see Africa as a burden, and should remember that without Africa, where his parents were born, he would not be in London today!