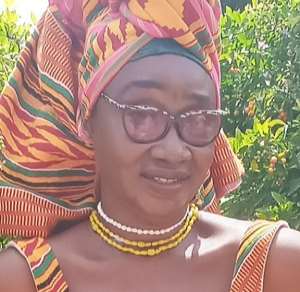 Ghana Montie,  Is a True MORAL Revolution from a citizenry evolution not Outstanding, still?  Whew, what should the nation do, just stand  at nil?  How come important men are  impotent  in Power Tents without Ideation and cannot ACT ? except  out of corrupt  self interest rather than national interest, even when political annihilation is staring their  NPP smack  in the face?  They rather strive to protect their created "Ofori Attah"  tin gods who they cannot dodge? Those who  swore to disown corruption only to be consumed by it, are they not in charge with greed as their creed?

Are there no selfless National protective Fathers and Mothers  with dominion to look after "yen ara y'asaase yi"; embrace the entire nation with  vision and  with  grand causes to  lead us to safety from insecurity and entrenched corruption which is the underlying issue why  Ken Ofori Attah has been planted like an  unshakeable, indispensable rock of offense, with a lost plot?

The resulting mismanagement and  inflicted extreme hardship in the system  is at knives edge, empowering  seismic change by  gingering  up anger  to rise up  to a near  crescendo of explosion  for the sake of saving the future. What is the sacrifice going to be? Must the nation suffer while  President Akufo Addo  stick  to his rusty guns by  Ken Ofori Atta's untenable side in mutual protection? Must The whole  governing corrupt system  not be overhauled  after  egoistic  nepotism & self_destructive abysmal failure?

What is  a President who as Attorney General refused to prosecute the same Ken Ofori Attah  when asked by the SFO to do so,  going  to do now !

What should happen to President Akufo - Addo who sees no evil, hears no evil  and covers up evil  even when evil is being done right in his face, if he finally finds strength in his voice to sack or ask  his "consecrated" Ken  Ofori Attah to resign when  undue protracted  damage  is already done.  Has "Kenbond" not  been implementing the President's approved policies with the President's applause, and our disgust at their recalcitrance? How can one go without the other is the Presidential challenge!

Instead of heroes we have woes from  those with egoes and power  but cannot do...."won ntumi" .

Dear Ghana, Have I not been  warning that there is a destructive force of  nation wreckers within our politics  including  Presidents and would be Presidents ? How they collude to  shortchange Ghana with covert operations! How they seek to destroy lives to protect  their  secrets and ambitions! Thank God for vindication that when things are terrible, insiders with knowledge must  sacrifice and ACT to protect the national interest.

How interesting that 80 of the
majority MP"s who hitherto had eyes but could not see beyond rubber stamping obvious governmental  malfeasance  have suddenly "got religion" seeking  Ken Ofori Attah's sacking, rather  belatedly when they should NOT have approved him,  twice,  in the first place! Are these the men we have been waiting to see? Should we clap for them to do more than just seek to protect their political turf "to break the eight" that is receding into a  mirage as we speak?

Now then, is the majority MP,'s  with  "U.K copy cat " clamor for Ofori Attah's head  the beginnings of a dreaded  "insider coup"  that will spiral upwards to engulf the President who should not have appointed  Ofori Attah,  but did so, to spite a defrauded nation, with a fake Christian charade?

Will complicit MP's  who have been culprits in corrupt  misgovernance from both sides of the political divide ultimately  stand firm to provide the spark that will ignite the purge for purity and goodness in our public space?  They must begin with themselves, repeal cyclical 4 year pensions and hideous Presidential packages etc in article 71  mutual back- rubs   as they seek  to freeze nonsensical expenditures? Will we see some  Ministerial and MP principled resignations for a cause celèbrè of not just Ofori Attah's sacking,  but  a fundamental redress of  systemic dysfunction or is that too much to ask?

Will Ken Ofori Attah ever give an account of his databank divestiture  initiated " Tiger Fund' witholdings of 15% of divested national entities  and $15m SSNIT funds relating to  Societè Genèral  which have been  untraceable among other feats such as "Agyapa" conundrums  and  reckless conflict of interest  borrowings that has  Ghana stagnated  in a debt stupor or  is he just to be sacked?

Has the cedi, as  the  worse performing currency not Betrayed Veep Bawumia as being not credible? We feel lied to and  duped by his " "strong" economic management team.  The  Ghana economy is utterly "shambollic' and the cedi has become "gyimi gyimi' and  hatahata" after  insane grabs  from a  leaking  Ghana raft,  adrift and  sinking in a misgovernance mire led by  Power  bigots and their "mi amigo hirelings even as  Ken Ofori Attah taunts us that  we should not panic  because they cannot feel our pain, read our intense  anger or feel our hunger and utmost frustration. Is it  economic freedom, is it economic justice  when timely calls for redress  were met with abusive  mockery and  overt impudence? oh Oman Ghana , due ne amane hunu",  I shall not say I told you So!

Indeed, in a Ghana where all are suffering, yet Presidential daughters utilize multi -million dollar properties side by side in plush Cantoments for boutiques and restaurants, are they indulging pastimes or running businesses intended to turn profits?  is that a shinning example of 1D1F,  one constituency  one million dollars to bring prosperity to the suffering masses?

Yes, Indeed Where is demonstrative leadership when the nation is being ravaged by Galamsey in a corruption inferno that is savage and indiscriminate? The heartless rape is the new national mis-development agenda with existential recriminations that should  incite rage as the  galamsey  scavengers  set loose like demons devour Ghana entrails  for self enrichment and national impoverishment without control.

Starting from Truth, we need  acknowledgment that  we are doing things wrong.

We  are not  doing our best for our country. All our institutions are rotten in corruption. We are all trapped in a  corrupt mediocrity tyranny,  trying to see our "how far", cheating in our little corners while we complain, waiting for the next election fanfare, so that politicians  will come with expected ill-gotten  booties for our votes. The thievery on a massive scale is not sanctioned by ANY  Democratic Ethic.  It is sheer tolerated  national destructive  idiocy.

No wonder they disappear and treat the populace  shabbily like the beggars the masses have become, for little drops of free education , give a dog a bone, whether they can afford to pay or not so that they  can become grateful  card holders and  payback via  votes .

We are  in a dumb  cyclical dump while sidetracked by  an enforced e-levy because it is  easy pickings  not financial intelligence,  it is  indulgence without comprehensive coherence that has also failed the "Beyond Aid "prophets and landed us  at IMF ailing for Aid

This is the Testament:  That the ordinary  men and  women and even children  should rise up and fight to reclaim what is Right. The frontier to fight is our dependence on Corruption

Ghana's 1992 Constitution clearly has  bogus provisions that  enable  governance to become a super structure of corruption and oppression centred around one person, the President, with an institutional & citizen collusion that eats up development. Corruption is now  the sad unity glue transcending  political party, tribal, gender and age metrics in  plundering development without reckoning ?

We have  self -service leaders at all levels  who raid us dry with little or no  repercussion  This is the foundation of corruption  which the populace feel justified to copy or emulate for survival in a bottomless spiral. This is why  The whole system needs "OVERTHROW!"

Please do not put words in my mouth or misquote me. IF what I have said with clarity is not clear enough,  I am saying that the  absolute disdain of good counsel, the corrupt big doings and mismanagement  by those in nepotistic  power with  resulting severe   unprecedented hardship    is  calling for a spontaneous implosion that will overwhelm us when we least expect it.  who knows what the last straw that will invite the match stick that will ignite the fire which the President will attempt to douse on Oct 30th, 2022 at 8pm will be? Will he speak the Truth? Will there be a truce?