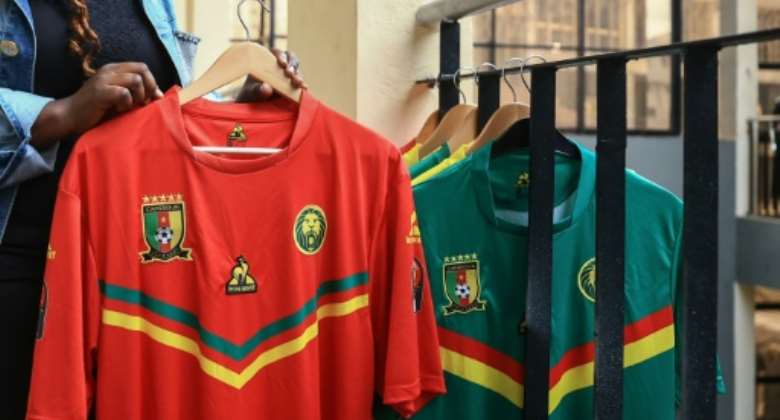 With the World Cup due to kick off in Qatar just weeks from now, Cameroon's famously raucous fans are gearing up to give the Indomitable Lions every show of support.

But worry, and not jubilation, is etched on the face of Zobel Wansi -- a trader who has become a collateral victim in an ugly row between the Cameroonian Football Federation (FECAFOOT) and France's Le Coq Sportif kit maker.

In July, FECAFOOT renounced the contract it had with Le Coq Sportif that ran until 2023, accusing the firm of failing to provide gear for all Cameroonian teams and open promised stores in Cameroon.

Thus began Wansi's nightmare. The following month, FECAFOOT announced a tie-up with America's One All Sports, and all his stock was now out of date.

"We laid in big stocks of jerseys before the World Cup," Wansi said, casting a forlorn look at the Coq Sportif shirts in green, yellow and red in his store at Doula, Cameroon's economic hub.

At best, he said, "one or two a day" might find a purchaser.

Thomas Djingo, a rival trader on the same street, was equally bitter, although none of the new One All Sports kit can yet be found in the shops.

"Some people are holding back from buying, saying that the new jerseys will be on sale any time soon," he said.

"If the (new) contract had been signed after the World Cup, we would at least have been able to get rid of our stock," he sighed.

A store manager who asked not to be identified questioned whether Cameroon had in fact switched suppliers. Le Coq Sportif on September 27 announced it had filed a lawsuit in France against FECAFOOT for illegal breach of contract, but gave no further details.

In a local bar, fan Boris Essomba was decked out in jersey and shorts by Coq Sportif, and seemed unfazed by the controversy.

"The most important thing is the national colours," he said, sipping a beer.

Cameroon have qualified eight times for the World Cup -- the highest of any African team -- although they have never reached the knockout stages.

They have won the Africa Cup of Nations five times. In Qatar, they are grouped with Switzerland, Serbia and mighty Brazil.

After signing its deal with One All Sports, FECAFOOT last month issued a call to tender for "entrepreneurs wishing to sell the Indomitable Lions jersey on the national market" -- and warning that bidders would be closely scrutinised for their plans to combat counterfeit goods.

"The goal is to prevent forgery by controlling the distribution network in Cameroon, which has never been done before," a FECAFOOT source, speaking on condition of anonymity, told AFP.

At present, most of the jersey sales in Cameroon appear to be illegal copies, although the true picture is impossible to know.

A customs official, also asking not to be identified, said the counterfeit jerseys were typically smuggled into the country inside bigger shipments "from China, Turkey or Hong Kong that have been tagged 'various articles of clothing'."

FECAFOOT says the tendering process will culminate in the choice of three official jersey distributors -- which means that smaller vendors like Wansi will be left on the sidelines.