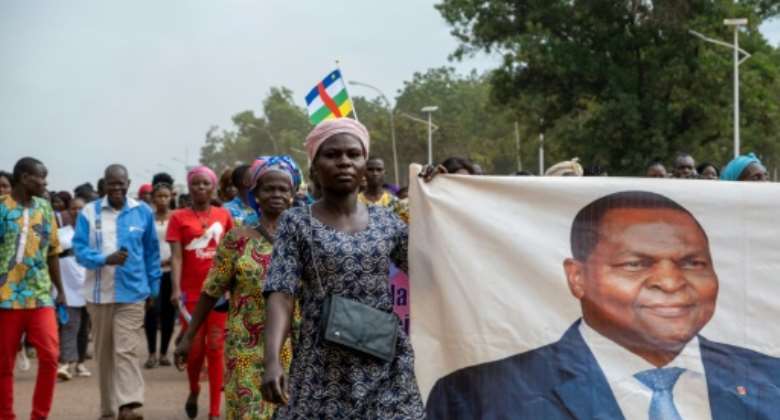 Touadera supporters marched in August to demand constitutional changes enabling him to run for a third term. By Barbara DEBOUT (AFP/File)

The president of the troubled Central African Republic, Faustin Archange Touadera, on Tuesday fired the country's top judge, a move the opposition lashed as a "constitutional coup" aimed at extending his time in power.

Touadera issued a technical decree, read on national television and radio, that amounted to a sidelining of the head of the Constitutional Court, Daniele Darlan.

It touched on regulations passed in 2017 covering the election of judges to the court, and said specifically that Darlan was now subject to "definitive preclusion" from office.

A coalition of opposition parties and civil society groups, the Republican Bloc for Defending the Constitution (BRDC), accused Touadera of mounting "a constitutional coup d'etat."

It "violates sacrosanct constitutional rules that (Constitutional Court) judges cannot be removed from office," the BRDC said, adding that it would file a lawsuit against the decree on Wednesday morning.

Darlan has been a long-standing thorn in Touadera's side and is frequently attacked or threatened on social media and in pro-government rallies.

On September 23, her court annulled presidential decrees setting up a committee to rewrite the constitution -- a move that had sparked fears Touadera was seeking to breach the country's two-term presidential limits.

Approached by AFP, Darlan said she would refrain from commenting until the opposition's judicial complaint had been concluded.

The CAR is one of the poorest and most unstable countries in the world, experiencing only rare moments of peace since it became independent from France in 1960.

It plunged into bloody civil conflict in 2012 that was eased by an intervention by France, the former colonial power, and the deployment of a UN peacekeeping mission.

As relative stability returned, Touadera was elected in 2016 and was returned for a second term in 2020, despite widespread accusations of electoral flaws.

As rebel groups advanced on the capital during the election period, Touadera brought in Russian paramilitaries to help shore up his government, strengthening security ties with the Kremlin.