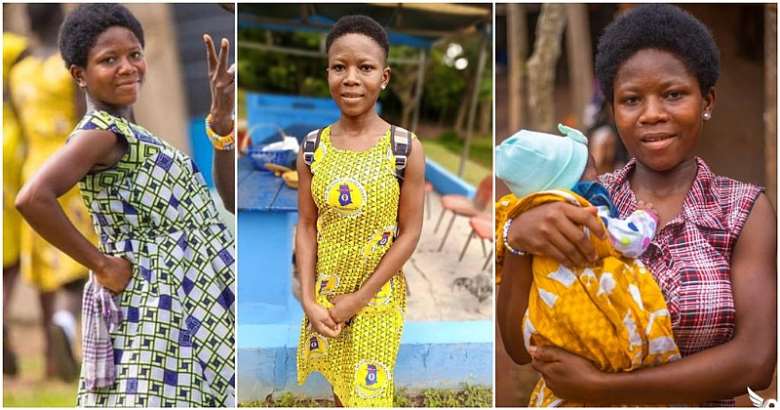 Beatrice Kenyo, an 18-year-old mother of a 5-month-old baby has successfully completed her Junior High School (JHS) education, but not without hurdles.

She sat for the 2022 Basic Education Certificate Examination (BECE), officially bringing her JHS education to a close on October 20, 2022.

In the Akwatiakwaso Community of Abenta Village in Adawso, a town in the Eastern Region, where Beatrice lives with her mother and six siblings, it is a norm for teenagers to indulge in illicit affairs that can lead to pregnancy.

This is basically due to poverty and pressures from one’s peers.

That was the circumstance Beatrice Kenyo found herself in. To her, getting a 20-year-old boyfriend was a way to get approval from her friends in that same circle.

Also, getting a boyfriend was also the only way to augment the little money she got from her mother for school.

Beatrice made these revelations in an exclusive interview with Emelia Naa Ayeley Aryee, a Ghanaian journalist, gender advocate, and one interested in women and children’s affairs.

By completing JHS, Beatrice thus overcame what seems to be a canker in her community, where young teenage girls who got pregnant end up being forcefully married to their equally young partners, bringing their education to a halt.

Beatrice had a baby

The zealous Beatrice was regular in her school attendance during her pregnancy period, and would only miss school when she had complications or was sick.

In fact, she was in school the whole week prior to her delivery week. She disclosed that her class teacher, Mr. Lord Addo Yobo, advised her to stay away from school so she would prepare herself adequately for the arrival of her baby.

But for the timely advice of her teacher, Beatrice could have given birth to her baby in the classroom. For her, she felt strong enough to keep going to school until she experienced labour pains wherever it would happen.

Grandmother and cousin to the rescue

Determined not to let the feeding and caring of her baby stop her from continuing school, Beatrice got back to the classroom less than a month after delivery.

She told this journalist how she managed to persuade her grandmother and little cousin into taking care of her child while she went to school.

Her own mother was not in a position to take care of the baby, and so Beatrice had to either stay at home or find someone to leave the baby with.

During break time, she would sneak out of the school compound to her grandmother’s house to breastfeed the baby, and then return to the school after break time was over.

What next after BECE?

Being an average student, Beatrice is expecting to score an aggregate 21 in her BECE. She aims to continue to the secondary school level, and become a nurse in the future.

She also pleaded with well-meaning Ghanaians, non-governmental organisations (NGO), and other civil society groups to come to her aid so she would achieve her dream of becoming a health professional.