President Kufuor Is Running Out of Excuses 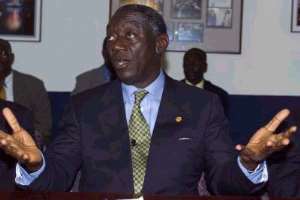 Why would a president use his State of the Nation address to lash out at a school of thought that has had zero influence in his administration? The answer is a simple one, but it is not an easy one for Kufuor to face: His policy is visibly falling apart, and his critics have been proven right. But rather than defend the fruits of his policy, Kufuor has chosen to caricature critics who warned him of his corrupt and incompetent appointees and the ineffectiveness of his policies. Like all politicians in trouble, Kufuor knows that the best defense is a good offense. ECONOMY “Uncomplimentary stories on website drive away potential investors” - President Kufuor in his State of the Nation Having plunged us further into economic dismay, Kufuor now confronts the real possibility of economic collapse and a failed presidency. Kufuor's policy has been and continues to be: Travel more, Investors come, economy improves With no investors in sight and an economy in a mess, Kufuor seeks to counter critics who warned him that attracting foreign investment starts from fixing the mess in ones own background, not unnecessary travel to far off lands. Initially the excuse was NDC, NDC, NDC. That excuse worked for a while, but one can only “fool some of the people some of the time”. So, the latest excuse in town is blaming “uncomplimentary stories on the internet” for the lack of investment in the country. His assault is not only non-credible, it borders on the desperate and pathetic. According to evidence provided on a discussion forum on the net, in 1999, candidate Kufuor with the support of ex-KMA boss Jumah used this same media to pour scorn on Jerry John Rawlings' administration and plant “uncomplimentary stories on Ghana” on the internet. We, the people of Ghana, demand an apology before we take his request seriously. CORRUPTION “…journalists who have corruption allegations against public officials must present their evidence to the police for investigations” - Kufuor in his State of the Nation This statement proves, beyond reasonable doubt, that the 'gentle giant' is completely detached from the “Ghanaian reality” Ghana Police is a BIG joke! They will not dare investigate a presidential appointee. This has been the case from Nkumah through Rawlings to Kufuor. Nothing has changed…. And the evidence is staring the president right in the face –Alhaji Moctar Bamba!

Kufuor has come to believe that corruption is only an issue of 'perception' and media its cure. Corruption is now worse than it has ever been in Ghana. The cause is poverty and the 'perception' that the president and his appointees are all corrupt. The only way to survive in these desperate times is to adopt the NPP tactic: Steal, Deny and sue critics.

With scorn being poured on his “Zero Tolerance for corruption” policy, Kufuor reverted to the same tactic: Caricature and castigate critics of his own failed policies.

"My attorneys worked on my behalf to respond to the charge [using public funds to renovate his private house]. Somehow, the person who laid the charge, an honourable member of this House (Parliament), just failed to prosecute the case, yet charges of that kind continue to be made."

"Where does it happen in these parts that a sitting President so readily submits to investigation?" he asked.

Duh! So readily? For heavens sake, this happened in 2001AD - It is five years too late. Secondly, we were made to believe then, that, a poor farmer paid for the renovation. Case Closed?

If Ghana is angry over what “lack of planning” have wrought, John Kufuor cannot credibly blame NDC or journalists. These fellows have an excuse. They were nowhere near the scene of the crime…. They are not in power!

It is John Agyekum Kufuor who is running out of excuses. Views expressed by the author(s) do not necessarily reflect those of GhanaHomePage.