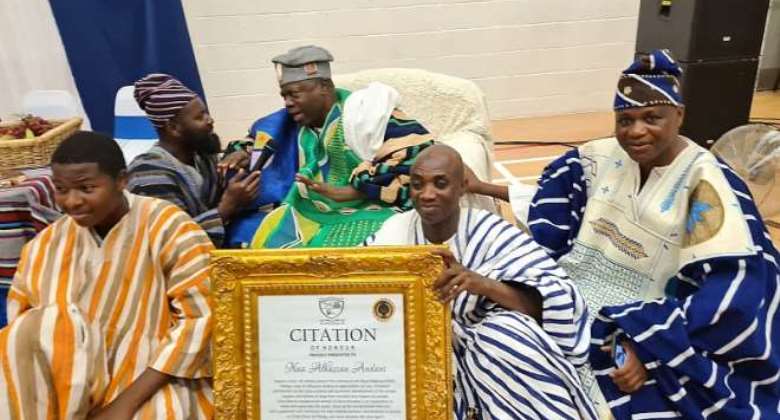 The event started with the attendees observing a minute silence and recitation of the English national anthem in honour of the late of Queen Elizabeth II.

The Special Guest of Honour Pishigu Lana (Chief) Dr Alhassan Andani, in his keynote address, recounted the cordial and special relationship existing between the Royal family of Great Britain, Northern Ireland and Ghana.

He urged the natives of Dagbon living in the UK to be good ambassadors of Dagbon in the UK. Pishgu Lana also asked members of DUUK to pray to Almighty Allah to grant Janatul Firdaws (Paradise) to the late Mion Lana Abdulai Mahamadu and all departed souls.

Pishigu Lana delivered a goodwill message from the overlord of Dagbon Kingdom, Ndan Ya Naa Abukari Mahama to DUUK. The revered King congratulated DUUK on its 10th Anniversary and urged members of DUUK to continue to be each other’s keepers so that "we can continue working together to promote comprehensive and ever-lasting peace for in Dagbon."

Pishigu Lana cited a Dagbon proverb which he explained that a child who has travelled and lived away from home is older than his/her parents indicating that parents need to learn from that child. The revered Chief said natives living outside Ghana have acquired professional experiences that the Dagbon Traditional could tap from and harness to bring about development in Dagbon and Ghana as a whole.

Dr Andani mentioned some developmental initiatives such as Dagbon Strategic Development Plan (2022-2032), Dagbon Development Fund and The Gbewaa Palace project. This he admonished DUUK to come up ways DUUK can collectively contribute its quota to achieving the aims and objectives of these developmental projects.

Chief Andani also advised natives to attract foreign investment into the Dagbon and Ghana at large. He underscored the importance of accurate and reliable data in development planning and urged the leadership of DUUK to create a data base of natives of Dagbon living in the UK.

In his welcome address, the Chairman DUUK Alhaji Alhassan Mbalba gave a brief history of DUUK: Alhaji Mbalba said DUUK started 10 years as a welfare group to support its members, and although the Union is called Dagbon Union UK, its membership is open to all descendants of Naa Gbewaa The Great – Dagombas, Nanumbas, Mamprusis and Mossi, and everyone who shares the aspirations and visions of the DUUK.

DUUK was granted a charity status by the Charity Commission on 31ST January 2018.

Alhaji Mbalba enumerated some of the modest achievements of DUUK; one of which is rendering generic welfare support advice to its members in the area of social services, education, health, immigration, mental health and housing; online Dagbanili classes, promoting the rich culture of Dagbon, and Funeral Fund just to mention a few.

Alhaji Mbalba said for him the greatest and most important achievement is the fact that the Dagbon Union UK has existed and survived for a decade, which is worthy of celebration. This is because some people opined that a group made of Dagombas will not survive for a year because "we will fight and quarrel which will lead to the collapse of the Association."

According to him, the assertion has always reminded and motivated members to continue to work hard and stay united. "By the Grace of the Almighty Allah DUUK is marking its 10th anniversary and membership keeps increasing."

Alhaji Mbalba said DUUK is looking to work together and collaborate with Dagbon traditional chiefs, Dagbon Traditional Council and other stakeholders to accelerate development in Dagbon.

With a relentless effort by the organisers Mr Ibrahim Wanzam(IB) and Mr Abdulai Alhassan, Alhaji Hardi Adam (Progress), traditional drummers and dancers graced the occasion and entertained the guests with Dagbon traditional dance and drumming.

Pishigu Lana was ushered in and out of the venue with traditional appellations or praising where he majestically and elegantly danced to the admiration of the attendees. Some Mabilgu joined Nyeb Pishigu Lana in the dance.

Alhaji Mbalba presented a citation to Pishigu Lana in appreciation of his support for the development of Dagbon.