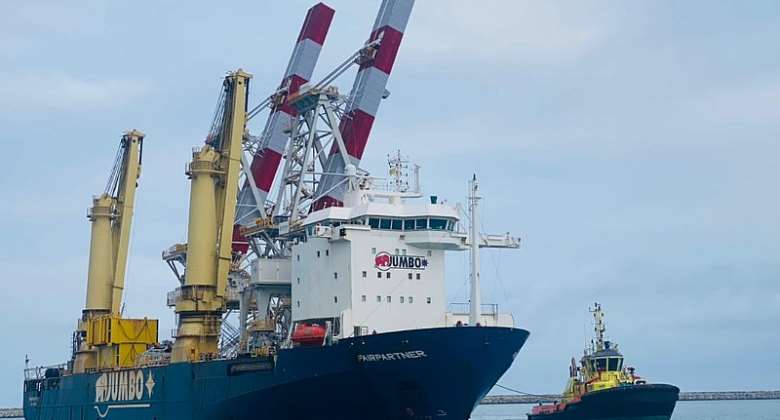 The Takoradi Port has taken delivery of a heavy lift carrier/ship, (MV Fair Partner) with two ship loaders and an eco-hopper as final components.

The delivery would complete the full installation and automation of the newly constructed Dry Bulk Terminal Conveyor System at the Port.

These were in a statement issued and signed by Dr. Kingsley Antwi-Boasiako,

Marketing and Public Affairs Manager and copied to the Ghana News Agency (GNA) on Tuesday.

With a discharge capacity of 2500 MT/hour, the new conveyer system at the Dry Bulk Terminal of the Port could load a total of up to 120, 000 tonnes of Bauxite and Manganese in 48 hours, a remarkable improvement over the current manual grab system with loading rate of approximately 8000 MT/ 24hrs.

According to the statement, the construction of the dry bulk conveyor system and installation of the ship loaders as well as the eco hopper formed part of the second phase of the Dry Bulk Terminal Project, solely owned and operated by Ghana Ports and Harbour Authority (GPHA).

It said the installation of the Eco-hopper would significantly reduce dust and other pollutant emissions, making operations at the port environmentally friendly.

It mentioned other aspects of the second phase of the project to include an administrative block, a workshop, switching station, substations and complete pavement of the terminal and access road to the terminal.

In the first phase, an 800m quay wall was constructed with berth pockets dredged to minus 16meters chart datum.

The Harbour Master at Port, Captain Richmond James Quayson, who supervised the berthing of the vessel carrying the equipment, the automation of the conveyer system positioned the 16m deep and 800m long dry bulk terminal to receive capsize vessels.

Captain Quayson also stated that the improved turnaround time for operations would enhance ship turnaround time at the quay as well as reducing ship waiting time at anchorage.

The Director of Port, Captain Ebenezer Afadzi lauded the efforts of shareholders, management and staff of GPHA for the feat chalked.

He gave the assurance that Port of Takoradi would efficiently run the newly installed equipment at the Dry Bulk Terminal for the benefit of GPHA in general and Ghana as a whole.