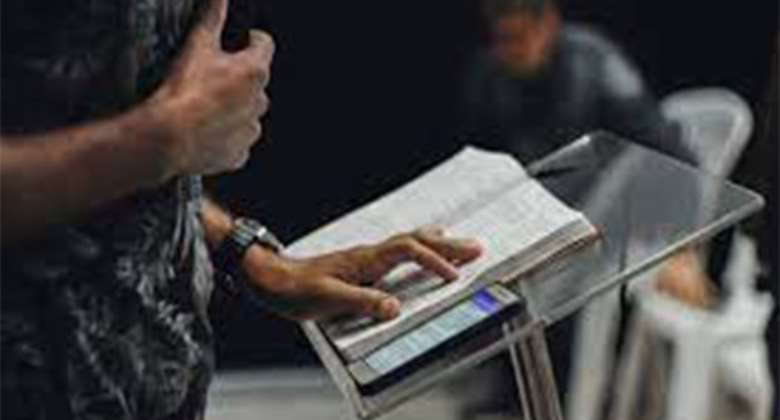 “Stealing in the name of the Lord.

My Father's House of Worship has become a den of thieves.

They fed our mothers with sour grapes and set our teeth on edge.

Yet the Reverend drives out fancy cars.

The people sacrifice to give them charity.

Stealing in the name of the Lord.

I have written several articles about charlatans who parade as men of God in this country. The last one was captioned: “Criminals In Cassocks.” The more I write about them, newer charlatans spring up like poisonous mushroom on cow dung. The Akans say until the one who chases you stops, you have to keep on running. And so here I go again.

Today in Ghana, Christ is being auctioned and as usual, only the highest bidder can buy. As for we the poor, we can only contribute through payment of collections with our coins any time we go to church for the auctioneer in the person of the 'Man of God' to get money to dress foppishly and eat well with his wife and children so that, he can carry on with the duty of auctioning the Lord Jesus Christ on big occasions. During such big occasions, only the rich sit on the front pew while we, the poor are relegated to the back seats either to sit if there are wooden benches or stand and watch while business goes on. Clapping and the shouting of AMEN are part of our jobs and we must shout our voices hoarse else the preacher man will reprimand us for not shouting loud enough. As the Jesus Enterprise Ltd. grows, the 'Man of God' will buy plastic chairs with our money so that at least we too can sit 'comfortably' while the extortion goes on. Poor souls whose search for illusive salvation continues to be illusive!

Yes, I do agree the Constitution guarantees freedom of worship. My problem is with the worshippers but not the charlatans. The charlatans are in business and you cannot blame them for anything. Worshippers are not forced or herded at gunpoint to go to such churches. They willingly offer themselves to be tricked, cheated and be turned into zombies. They are human beings but the difference between them and some of us is that, they are half-wits, nit-wits, and above all shallow-minded with low intelligence as well as emotional quotients. It was the buffalo who said it is unfortunate that it comes from the same species like the cow but sadly, the cow is a fool. The buffalo said if any Fulani herdsman or butcher thinks he is brave enough, he should come and tie a rope around its neck and drag it to the slaughter house to be killed.

The evil that these mushroom one-man churches and their charlatans who parade as 'Pastors', 'Bishops', 'Seers', 'Founders', 'Most Reverent' etc. do to the nation as a whole is that, they make the country lose man-hour in our daily endeavors to help improve the economy. And remember, time is money. Worshippers go to churches from Monday to Saturday and top it up on Sundays where money flows from their pockets to support the ostentatious lifestyles of these criminals in cassocks. These tricksters who call themselves 'men of God' don't build schools, hospitals, toilets, roads or orphanages. They use the monies they steal from the poor, unsuspecting congregation to buy posh cars, build luxurious mansions with architectural wonder, acquire the good things in life and live foppishly like decadent societies of yesteryears. Meanwhile, members of their congregation live in abstract poverty, living from hand to mouth. The worse scenario is the 'all night' that worshippers attend. They spend the whole night praying, singing, clapping and dancing till day breaks. When they go to their respective workplaces, they begin to doze off from the start of work and go home early before close of work to sleep because they could not sleep during the 'all night' worship. And these are the same people who complain that life is hard in Ghana. We have seen the likes of these criminals before and we are not deceived by their pretences of piety. They are fake and false prophets who parade as wolfs in sheep clothes, milking dry the lean cow.

If your house is located near one of these one-man churches, get out around four or 5 o'clock in the evenings on Sundays and watch things for yourself. You will realise that almost two-thirds of the worshippers who walk home after the Sunday services are women. A lot of these women are Mercenaries of Eros who wants salvation after wasting away their salad years under the 'Red Lights' in the cities where they used to ply their 'trade'. The few men you will see are either drummers, secretaries or tricksters who collude with the 'man of God' to fish for information among the gullible women about their problems and later brief the 'man of God'. Armed with such information, it is easy for the 'man of God' to prophesy the following Sunday. On the following Sunday, when the church members start shouting 'Odii hye nkom” (Prophet, prophesy), the fake prophet will start vomiting rubbish which he calls prophesy. No wonder the Akans say, every day you will find a foolish person at the market (Da bi ara kwasia ko dwa).

In 1990, the late Chairman J.J. Rawlings banned many churches which he considered to be of nuisance under PNDC Law 221. Listen to his Interior Minister, Nii Okaija Adamafio: “Too many bogus churches have sprung up in Ghana which are largely one-man operations, using the pretext of religion in order to further their own private interest.” Even the Jehovah's Witnesses were banned because they refused to salute the Ghana flag or allow their children to march during Independence Day celebrations. Rawlings was much angrier because the Jehovah's Witnesses did not allow their members to receive blood transfusion when they go to hospitals. It was the era where many one-man churches started sprouting up in the country. These charlatans were telling their congregations as they tell them today that they could heal almost every disease and perform wonders. Out of anger, Rawlings challenged them to go to the Akropong School for the Blind and heal blind students and stop their lies and ugly noises. That was Junior Jesus for you.

If Ghanaians had supported Rawlings during those days, we would not have been seeing what we are seeing today. Every day, you tune in to your television set and what you see and hear are these rogues making a mess of Christianity, one of the three Abrahamic faiths (Christianity, Islam and Judaism). They say they can heal every disease: make women pregnant, raise the dead, make the cripple walk, open the eyes of the blind, give winnable lotto numbers, 'double' money, pray for people to get visas and even make members of their congratulation rich without doing any work. Any member of the congregation who thinks he or she is smart enough and dare challenge or criticise their way of life is excommunicated. After all, was it not the 'Holy Ghost' who instructed the 'man of God' to always put on designer clothes and wear custom made shoes? How dare you challenge the 'anointed one'? I know these thieves and their hypnotised followers will call me Junior Judas after reading this piece. But do I care? Apuu! Good Morning, Evangelist Dr. Kromfuor Okomfo Agradaa, Africa's No.1 qualified con lady!