Ghanaians Be Aware of Rawlings!! 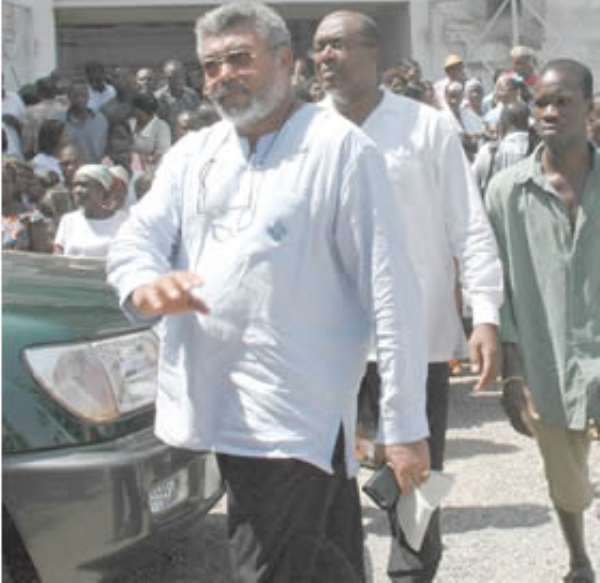 Once again, Jerry John Rawlings, the Founder and Father of violent behavior in politics has served notice that if he ever gets his way, all peace-loving Ghanaians will pay a heavy price for dislodging him from power. We all know that Rawlings has been suffering from a severe bout of Power Withdrawal Syndrome (PWS) since the year 2000 when Ghanaians sent him and his NDC packing out of their Castle hideout. He has never accepted the fact that he is no more in power. That accounts for his constant effusions and verbal attacks on any one who represents peace, normalcy and decency in political life.

Instead of behaving like any normal former Head of State with dignity which could easily have been reciprocated by his successors and the general population, he has since 2001 continued to show total disregard for the President of the Republic of Ghana and all that democracy is about. This is not surprising because Rawlings has said on so many occasions publicly that he has no belief in the ballot box: in effect what every normal person believes is the proper way to conduct the affairs of a country: the normal process of choosing and changing our leaders and governments. By this he has made it publicly known that the only thing he knows, loves and believes in is violence: governments must be changed through violence, political parties must be organized with violence, conversations and exchange of ideas have to be conducted through violence especially if he does not agree with someone else's ideas. In effect this man symbolizes all that the word "violence" is all about.

Ghanaians have enjoyed relative peace and normalcy in their body politic over the past five years and that is making the Founder and Father of Violence very uncomfortable. Over the past five years, Ghanaians have enjoyed what is called in normal societies as "the rule of law", under which people suspected of wrongdoing have to answer for their actions only through a process called "the court system" where an accused person is given the opportunity to hear the charges against him/her and be able to defend himself/herself. Under this process, it is those who are accusing someone who need to prove his/her guilt. It is not a question of "guilty unless proved innocent" by yourself, a process that was the order of the day during the nearly twenty years that Ghanaians had to live under the violent rule of Jerry Rawlings.

In the middle of the year 2005, Rawlings served notice on the Ghanaian Judiciary that he will revisit what he did to them in 1982 when he got three of their top members abducted from their homes and brutally murdered because some of them had rendered judgement he did not agree with. And just before the close of the year 2005, Jerry Rawlings served notice that he still believes in his violent past. Addressing the Congress of his National Democratic Congress (NDC) in Koforidua, he warned that he will jail members of the current government for 30 years if he and his NDC ever get hold of power. He said

"Some of our best ministers did their best for this country and they were rewarded with Nsawam (the prisons east of Accra) from 2-5 years. Quite frankly I don't think they (the NPP government) will be in the castle for the next 20 years, they better prepare for Nsawam for the next 30 years".

These are Jerry Rawlings' own words to the delegates at the NDC Congress to which he received an applause. Here is a former Head of State of Ghana who is serving notice that he will send members of the current government to jail for 30 years if he had the opportunity, whether they are guilty of any crime or not. This is a frightening statement coming from someone who does not believe in any tenets or principles of democracy, from someone who does not believe in the principles of the rule of law, from someone who believes that his word must reign supreme whether he is right or wrong. And when Rawlings talks about jail, we understand what he means: torture, disappearance and death to his opponents and enemies, real or imagined. And he has done it before.

To prove his point he got his perceived opponents in his political party subjected to severe beatings in Koforidua in December and chased those he could not beat up out of the party. The former National Chairman of his party, Dr. Obed Asamoah proved these fears about the Rawlings persona in a statement on Thursday January 5, 2005 when he announced his resignation from the party he helped found. He said: "Within the NDC as of now dissent, particularly against certain personalities, is considered as treacherous to be dealt with by violence and hooliganism. It is obvious that I do not share in those methods. I therefore can no longer associate myself with an organization employing such methods".

We all know the personalities Dr. Asamoah referred to. When the former National Women Organizer of the NDC, Frances Essiam tried to rub on the wrong side of this personality called Rawlings, she paid a very heavy price when she was subjected to the most severe beating she has never imagined at the Congress in Koforidua. Both Dr. Asamoah and Frances Essiam, two top officials of the party are telling Ghanaians that Rawlings and the people around him only believe in violence and hooliganism. An old Akan adage says that if the frog comes from the pond to complain of heat in the water, no one should doubt the claim. Do peace-loving Ghanaians need any further proof that the man Rawlings is dangerous for our country's stability and peace? Did Ghanaians pay attention to how peacefully the elections for the National Executives of the New Patriotic Party (NPP) was conducted at the University of Ghana, Legon, a week before Rawlings subjected his opponents to a taste of his methods at his party Congress in Koforidua?

Ghanaians now have a clear choice: to support and retain in power the party and government that has ensured and nurtured for them peace, stability and adherence to the rule of law, (the NPP) or the tried, tested and known exponents of violence, hooliganism and non-believers in democracy? If anyone had any illusions as to which of the political parties in Ghana will best serve the interests of Ghanaians, events over the past three weeks in Ghana have proved their fears and given them a clear idea of what awaits them if Rawlings gets his way again at the helm of Ghanaian politics and the seat of government. Gone forever should be the days when the dungeons at the Osu Castle were the venues where people had to answer for suspected crimes instead of the established law courts.

If NDC comes to power again, this process will surely be repeated. "Se ye nnim owuo a ye nhwe nda" Just read Mr. Ato Ahwoi's recent strange statement and that should alarm everybody, "Frances Assiam claims that she was beaten. Have you seen her back? Have You seen the marks there? Who saw her beaten and has she shown it to anyone?" What a shame!!!

Ghanaians should be on the lookout for the moves of Rawlings. We need to ensure that that thing called "power" in Ghanaian politics never again falls into the hands of Rawlings by accident or design. We will all regret it. Rawlings has served notice and we should take the notice seriously and be on our guard. We should all pay attention to what is happening now in the NDC. All descent-minded principled persons are resigning from the NDC citing reasons of hooliganism and cultism around the Rawlings persona.

We would like to serve Mr. Rawlings and his P/NDC a notice. Those of us in America who stood up to fight him in those dark days, shall do it again. He can continue to slap people around in his party but he will never get the chance to slap the general Ghanaian population around anymore. The choice is clear: Peace and stability or violence, atrocities, killings, disappearances? Nana Amo Adjepong, New York City and Michael Baffoe, Montreal-Canada Views expressed by the author(s) do not necessarily reflect those of GhanaHomePage.