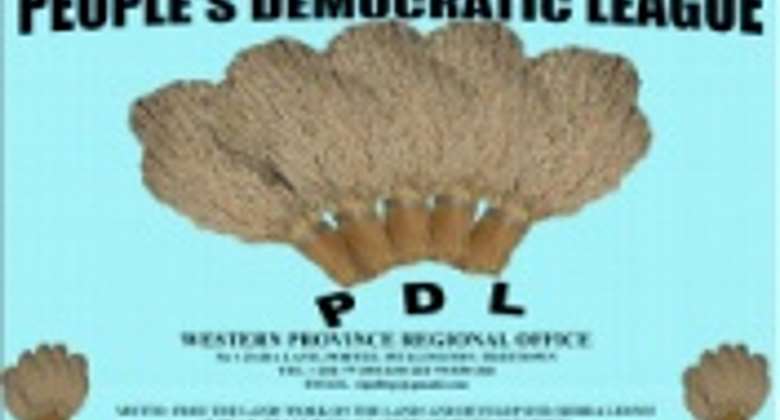 It is often said that no success is assured, without the blessing and support of the only One and Almighty God. This is true of the PDL, which is a God-fearing Movement for national rejuvenation.

So, we thank God for everything He has done for the People’s Democratic League (PDL), throughout the years. We pray and ask God Almighty for deliverance and immunity from sickness, lack, pain, wrong thinking, unhelpful habits and ungodly desires; and for a restoration from any form of loss, injustice, bondage, curse, error, mistake or abuse.

The changes in the PDL Constitution had been needed for a long time, to end the fusion of the posts of Leader and National Chairman of the Movement. The current Constitution was adopted in 2016 and published in the Sierra Leone Gazette in 2017, amended in 2017, 2018, 2020 and now 2022.

The PDL has had its Founding Father, who is also the Leader and National Chairman since it was established 36 years ago, in April 1986. With common sense, the PDL has decided to take a logical next step, to align with its values, principles and inculcate inclusive internal democratic governance. This is an important symbolic step to improve the image of the Movement, and to pave the way for fair, honest and transparent dealings in the Movement, and to send the message that the PDL stands for women's leadership role in peace, democracy and all-round development of Sierra Leone.

The People’s Democratic League Constitution 2016 has been in effect for six years and amended for the fourth time now. We saw the need to conduct a review of the Constitution, to address the demands and aspiration of our members, who have revealed flaws in that document.

The amendments being proposed by the Constitution Review Committee are in such areas as internal democracy, central leadership restructure, fair distribution of funds within organizational levels. The proposed amendments draft was delivered to our National Office, where members of the Interim National Executive Committee received each with a copy, to solicit their opinions and suggestions.

With God’s blessing and support, and after days of difficult and tense deliberations, finally the proposed amendments to our Constitution have been approved at the National Office, which closed here on Saturday. This happened on 15th October, 2022. The Interim National Executive Committee spent days to deliberate on, and unanimously adopted PDL’s revised Constitution, which shall come into effect as of the date of adoption.

Democracy in the new Constitution starts from the bottom and then goes to the top, whereas no member is left out in the decision-making process, to prevent domination and excessive influence. That is to say, the PDL is the only political Movement in Africa today that consistently revised its Constitution over the years, to prevent it (PDL) from sliding into a strong-man power obsession or one-ethnic-dominated or dynasty leadership or regional hegemony.

The adoption of the new Constitution constitutes a key milestone in boasting the image of the PDL, and by extension in consolidating peace, promoting inclusive democracy and democratic good governance in Sierra Leone. The amendment is also timely, and came about after the work of a Constitution Review Committee, which was established a hundred days ago, to thoroughly review our Constitution accordingly.

The most important amendment in our Constitution is gender balanced; inclusivity and devolution of powers from a super-leadership to a people-evolved, people-propelled, people-modeled, people-centered approach. This affirmed that the Movement must adhere strictly to self-governance in every respect, strengthen its values and principles and ensure that the organs at all levels are consolidated and sustained; internal discipline maintained and the fight against tribalism, regional divide retrogression keeps going.

PDL members envisioned that the need for the ultimate revision of our Constitution to meet higher level membership participation is necessary to enhance the democratic leadership role of the various Structures and Organs within the Movement. The new Constitution therefore seeks to fulfill PDL’s vision and mission.

To feather democracy in the internal working system of the PDL, detailed account of organizational and administrative structures, defined powers and functions are required and this has been provided in the new Constitution even at the cost of repetition and procedural details. This is because the PDL believes elections are an indispensable part of its building capacity, and a process that requires empowering members to collectively decide on the governance of the Movement, as well as the public representatives and policies they want and believe can salvage the Sierra Leonean nation.

A great importance was been attached to the continuing political education and training of members and leaders, alike. A Committee has been created in the new Constitution for the purpose.

Internally, democracy is the centerpiece of all dealings within the PDL, and this we seek to ensure that our Office-Holders do not simply walk into Office without screening or contests. To achieve the goals of best standard behaviours and practices, evaluation procedures for all members and leaders of the PDL, as well as procedures for selection of candidates for PDL Office vacancies and national elections, including Ward Local Councils, District Mayoralty, Parliamentary and Presidential elections and other elected public bodies have been carefully laid down in the new Constitution.

To help improve governance, think tanks have been provided for Policy Research and Development at the top while action Committees for monitoring and feedback provided at the lower levels. In amending PDL Constitution therefore, the following principles were considered:

With the above , we pray for God to forgive the sins of our fathers and leaders; for unity amongst our people; against the spirit of hatred and violence; for God to root out evil, and for God’s love to fill the heart of all people; against the plan of domestic and international terror groups, and that God will frustrate and foil their plans, and bring them to justice; for God to execute justice for those that have been murdered and subject of injustice in our nation and the world; for peace in our land and the world; and for the general wellbeing and security of our nation.

The new Constitution is aimed not only at entrenching internal democracy, transparency and accountability, but also to fish out traitors and political mercenaries who have invaded the Movement. It is not about members, but about the security, integrity and progress of the Movement and its members. Those who have been hired and paid by our detractors to obstruct the peace, unity and progress of the PDL, and are hell-bent of misrepresenting our Movement to make it look like it is an undemocratic entity, but are continuing to remain among us are like thorns in the flesh. It will be like cancer, so we need to cut them out if we are serious about cleansing the PDL of all double agents, witchcrafts, political frogs and agents of the underworld.

Altogether, there are 25 Chapters, 40 Articles and 190 Clauses spread in the 295 pages of the new PDL Constitution 2022 (As Amended), which will be printed and disseminated to the public, and made available through websites and the print and electronic media, as well as the social media platforms worldwide.

There are also 35 new provisions being introduced in the Constitution, and more in terms of Committees, Wings, roles and responsibilities and functions of Organs of the Movement. We have taken more steps further to expand some clauses and sections to inculcate other realities.

There is a provision for a new Wing for the Disabled, Farmers, Students, Diasporas, Senior Citizens, among others.