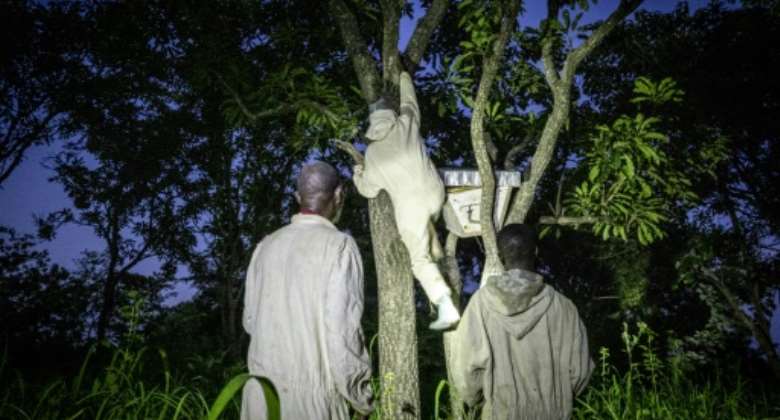 Guided by the broad beam of a torch light, four beekeepers softly tread towards a wooden hive atop a mango tree in Bossangoa, a town in northwestern Central African Republic.

The area boasts lush and varied vegetation which helps account for the prized fragrance of its renowned honey.

Relying on the darkness to calm down the bees, the team dislodges the buzzing hive to extract some of the precious nectar.

The Central African Republic was Africa's fourth biggest honey-producing nation in 2020 and ranked 20th in the world, according to the UN Food and Agriculture Organization.

But nine years of dwindling resources and civil war that left producers cut off and isolated have hampered the sector.

"Before the crisis, we sold our honey to neighbouring countries and to (the capital) Bangui," says Philippe Mobompte, secretary general of CAPICO, the regional beekeepers' cooperative.

As one of the team frantically pumps metal bellows, the smell of burnt, dry grass wafts through the air. Using smoke is an age-old technique to reduce the bees' aggressiveness.

"In Bossangoa, there are many shea trees, mango trees, papaya trees, grapefruit trees, banana trees... This is what lets us have high-quality honey," Mobompte says.

The cooperative is supported by the international non-profit organisation Action Against Hunger, which provides modern hives and equipment such as honey extractors and protective clothing for harvesting.

In his beige overalls, 64-year-old Mobompte -- who has 20 modern and 25 traditional hives -- reaches for the first batch of the glistening honeycomb cells.

One of the poorest countries in the world, the former French colony was plunged into civil war in 2013.

The fighting peaked in 2018 and rebel groups controlled two-thirds of the country's territory until early 2021.

Rebels tried to oust President Faustin-Archange Touadera in late 2020 by launching an offensive on Bangui, but the army -- with purported help from Russian mercenaries -- managed to repel it.

But the state still struggles to establish its authority in many remote areas of the vast nation.

The town of Bossangoa in northwestern Central African Republic is known for its fragrant honey. By Barbara DEBOUT (AFP)

Although the security situation has improved slightly in recent years, conflict still affects communities as you move away from Bangui, with sporadic fighting breaking out.

For Bossangoa's beekeepers, the danger and upheaval has left its mark.

"I remember a period when Chadians, Cameroonians and Sudanese came to buy their honey here, but today consumption is low," says Francine Webouna, 42, a honey trader in the Bossangoa market.

In February 2021, Bossangoa, in the Ouham region, was recaptured from rebels by the army.

Although calm has returned, the few hundred CAPICO beekeepers cannot venture far into the bush to further their operations.

"They might run into rebels who are still on the prowl," Mobompte says.

He himself says that while "the armed groups never touched my hives, they looted and destroyed my house twice."

"Taking the road to sell your honey is also dangerous, and expensive, because you can run into thugs and the taxes at the various checkpoints are high," Mobompte adds.

He is still marked by a recent assault on beekeepers from his cooperative as they headed to an agricultural fair.

Like the people he trains, Mobompte cannot live on the proceeds from honey.

The former French colony was plunged into civil war in 2013. By Barbara DEBOUT (AFP)

"There are no outlets elsewhere and, locally, people do not consume enough of it, I am currently storing 200 litres of honey while waiting to find a buyer," he explains.

"In the Central African Republic, it's not a luxury product."

Convinced of its quality however, the cooperative's members hope to branch out by processing their honey to manufacture derivative products.

But in the current circumstances, that could prove a tall order.

"We could make food supplements, shoe polish, cosmetics and be recognised for this," Mobompte says.

"But the lack of equipment, funds and knowledge do not facilitate this development," he concedes, mechanically wafting away the bees around him.