NPP, Akufo Addo, And the Politics of False Identity 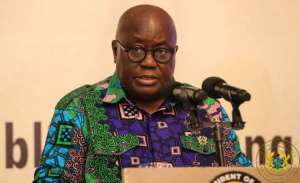 False Identity, the last time I checked, Brené Brown referred to it as a situation where individuals pretend to be what they are not.

According to her, people who are victims of this narcissistic personality disorder are negatively affected in many ways. These include denial of them of help when they need it the most, victims of false identity are always embarrassed, and they usually lack self-development due to their over-bloated ego.

Fellow Ghanaians, cursory glance at the Ghanaian political ambience suggests it has been hit by all the above effects. Considering at the time Ghana's dire need for IMF was denied all in the name of scammer programs like Ghana Beyond Aid, nobody should tell you that the managers of the Ghanaian economy are fraudsters, imposters, pretenders, masqueraders, and pirates!

As if a decent woman is delivering at the market square, the slideshow of embarrassments visiting the Flagstaff House in recent times make curious citizens wonder what could be the motivation of President Akufo Addo to still clinging on to a rather disintegrating, failed, and flailing government he has run aground due to massive corruption?

He is probably surviving under the influence of either weed or SRRT pills - Shame Resilience and Resistance Theory pills. Otherwise, no man with any iota of sense of shame can survive this level of disgrace and embarrassment.

Like Hon. Kwabina Agyei Agyapong once said, "nothing is wrong with this government but a symptom of a deeper malaise that has beleaguered it".

Nevertheless, our elders say there's no need announcing the obituary of a man who dies at the supermarket, and that, the beginning of a testicle can depict and serve as symptoms of hernia or otherwise in the nearest future.

The Akufo Addo-Bawumia-led administration had already begun their government on a note of deception and embarrassment in 2017. In fact, many Ghanaians thought President Akufo Addo could have resigned with immediate effect when he was caught in an intellectual theft plagiarizing a speech by a former USA President. That day was actually the beginning of our national shame as a country.

And unbeknownst to unsuspecting citizens, Akufo Addo's refusal to resign despite the political bunk and debacle, if such an honorable thought ever occurred to him, was a bad signal that political piracy was about to unfold in this country under his government.

Certainly, if the Department of History and Political Studies of the Kwame Nkrumah University of Science and Technology were to conduct research on what comes to mind when President Akufo Addo is mentioned, I am cock sure words like embarrassment, murderer, idiot, incompetence, Galamsey King, a womanizer (Serwa Broni), a thief etc. would be flipping through the minds of majority of Ghanaians.

From the hooting of President Akufo Addo to the shameful resignation of his fraudulent Finance minister, (dis) Hon. Ken Ofori Atta, only a fool can fail to see the hand-writing on the wall of destiny that all is doomed for the Akufo Addo government.

A survey conducted in 2017 by Quinnipiac University in the United States of America found that when President Donald Trump had been mentioned, words like idiot, incompetent, liar, asshole, embarrassment, evil, unqualified etc. came to people's mind. And by the following year 2018, the Trump administration became the most laughing stock government in the history of US.

Undoubtedly, the alleged use of subterfuges and political legerdemain resulted in dumping such suicidal monikers upon President Trump that led to the catastrophic and humiliating defeat he suffered in the 2020 USA general elections.

Fellow Ghanaians, say what you like, there is no gainsay that the top words that bang and agitate the minds of majority of Ghanaians today when Akufo Addo's name is mentioned are numerous including "a corrupt", "a thief", "a murderer", "a womanizer", "the most incompetent", an imposter, "a nepotistic", and a first class "fraudulent leader"!

A corrupt leader because, it was President Akufo who campaigned vigorously against alleged corruption under President Mahama and yet Akufo Addo has superintended over the disappearance of billions of dollars and cedis as president. A thief because, with such a colossal amount of money being vanished into the thick pockets of his regime, Akufo Addo and his political vultures are the first to cast the first stone: They call and brand others as thieves while they rob citizens at a gunpoint with unprofessional national security apparatus the NPP implanted into the national security framework; a murderer because, Akufo Addo own brother's death case (J.B. Danquah) as well as the death of Ahmed Sulley, Mohammed Kaaka, his own party's activist, were all strangulated to death. Probes of those cases were never executed.

A womanizer because, as a country, we are all aware of our dear President's unusual taste for fat foreign butts of fair women. And nobody will debate the fact that His Excellency President Akufo Addo (and may God have mercy on me for combining such words together: His Excellency and President Akufo Addo) is most less than competent in economic management with his Third Class Honours Degree in economics at the University of Ghana. As a result, who does not know a man who claims to be what he is not is an imposter?

Today, what majority of children are allergic to in Ghana is the phrase, "Fellow Ghanaians", and if it is the voice of President Akufo Addo, babies begin to cry. As if they know: "this is our future poisoner".

You see, of all the names Donald Trump was associated with which were dumped on him by dissatisfied citizens of the USA, the ones that gained the most notoriety and ranked above all the rest were the words "idiot", "incompetent" and "liar" with 39, 31, and 30 votes respectively.

Uunless you are a participant in the thievery, gangsterism and outright robbery that have been going on in this country in the last almost six years, every level-headed Ghanaian can outline and confess that the top most words that come to mind when President Akufo Addo is mentioned are "embarrassment", "nonsense", "corruption", "failure", "thief", "Fellow Ghanaians", and what follows is nothing but fraud, political vulgarity, decimation and battery of our country's future.

Indeed, unless something urgent happens miraculous in this country, if Akufo Addo ends his stolen second term, Ghana may never be resurrected from her current political embarrassment, perfidy and perversity.

What is unpardonable and most offensive is the dastardly and cowardice of his government to own up and accept responsibilities of their insufficiency of leadership. Indeed, if there's anything the Akufo Addo-led government has perfected as an art, it's shifting of blame and being pretentious.

It comes as a no surprise that some section of the populace refers to the New Patriotic Party as a Narcissistic Pretenders Party - False Identity.

The masquerade the NPP government put on in the buildup to the 2016 general elections has overtime become a most terrifying political Halloween - a very scary monster it behooves every political kingmaker in this country to rise up to unveil.

Indeed, history is replete with men of his kind who attracted evil fellows and surrounded themselves with people they are worse than.

The good news is that such men and women never miss their reward - they always receive it in full. And the reward of His Excellency is ripe and ready for harvest. That's why President Akufo Addo can no longer travel without carrying his own chair.

The truth is, no man can ever heal cancer with paracetamol.

Many people have forgotten that the length of the frog is only measured upon its demise.

All those who tell lies into the future shall come to meet them.

Akufo Addo has spat into the air and is collecting his own spittle with his face.

Earthquake death toll rises to more than 5,000 in Turkey, Sy...
4 minutes ago