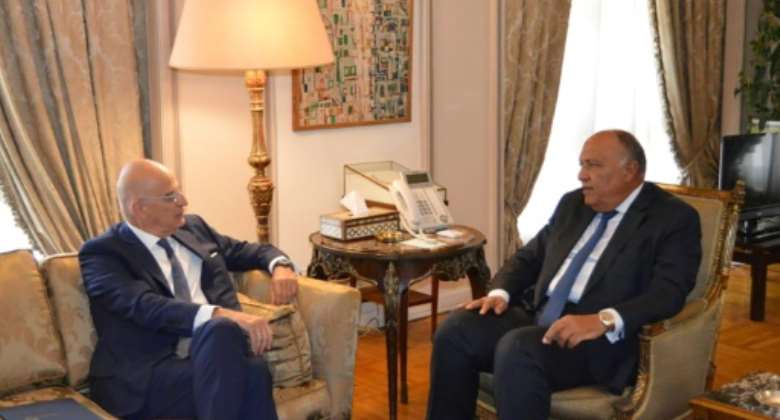 Egypt and Greece on Sunday said a deal allowing Turkish hydrocarbon exploration in Libya's Mediterranean waters was "illegal" as Athens said it would oppose it by all "legal means".

On Monday, Turkey said it had signed a memorandum of understanding on exploration for hydrocarbons in Libya's seas with the authorities in Tripoli.

"This agreement threatens stability and security in the Mediterranean," Greek Foreign Minister Nikos Dendias said in Cairo, where he met his Egyptian counterpart Sameh Shoukry.

The deal follows an agreement Turkey signed three years ago with Tripoli that demarcated the countries' shared maritime borders.

"We will use all legal means to defend our rights," Dendias added.

He said Tripoli "does not have the necessary sovereignty over this area", and that the agreement is therefore "illegal and inadmissible".

Shoukry charged that the mandate of the authorities in Tripoli has "expired" and that "the government of Tripoli does not have the legitimacy to sign agreements".

A rival Libyan administration in the war-torn country's east -- which since March has been attempting to take office in Tripoli and also argues the government's mandate has expired -- has rejected the accord.

Monday's deal builds on an agreement signed between Ankara and a previous Tripoli-based administration in 2019, at the height of a battle for the capital after eastern-based military chief Khalifa Haftar attempted to seize it by force.

The delivery of Turkish drones to Tripoli-based forces shortly afterwards was seen as crucial in the victory over Haftar, who was backed at the time by Egypt, Russia and the United Arab Emirates.

The question of rights to Libya's vast hydrocarbon resources has become more urgent this year as global energy prices have soared.

The European Union has denounced the 2019 maritime border deal, while France has said the recent agreement was "not in accordance with international law".