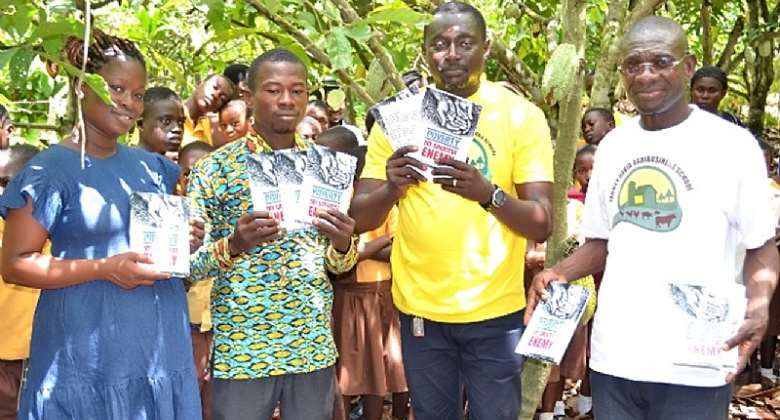 The Executive Director of the Mark Impact Foundation, a non-governmental organisation which prioritises the welfare of youth and children, has stressed the need to collectively work towards eradicating child labour in cocoa communities.

David Nana Edjah, who is also an author, made the call when his Foundation distributed copies of reading materials to some children of cocoa farmers in Suhum in the Eastern Region. He also presented copies of the book to the World’s Best Cocoa Farmer 2021/2022, Charles Oppong.

The books were donated as part of plans by the organisation to help Ghanaian children to develop a love for reading. The book is titled “Poverty My Greatest Enemy”. The objective of the book, he explained, is “Changing the Youth from a Poor Mindset to a Successful Mindset”.

He said the Foundation believes in investing in the minds of children in developing the future of the country and continent at large.

“Through books, you learn, you travel the world, you understand the world, and you become the global citizen. Our goal is that more and more Ghanaian children, particularly those in cocoa farming communities, will develop the art of reading and a love for books.

“Books are full of knowledge, and you can travel anywhere in the world through books. You expand your thinking horizon, and for that reason, we believe that making books available is the key thing, and so this donation today is our widow's mite,” Nana Edjah added.

The Executive Director believes that child labour is an affront to the fundamental human rights of children and a threat to their present and future wellbeing.

He, however, emphasised that the eradication of child labour from the country can only be possible if society gets all hands on deck, spearheaded by a political will showing the way.

Nana Edjah further observed that much of the child labour cases found in West Africa is the hazardous form, where a child is in danger through such things as carrying heavy loads, using dangerous equipment, such as machetes, or being exposed to chemicals.

“Every year, the chocolate industry’s big players assure us that they’ll do something about child labour and the huge numbers of children being exposed to chemicals that burn their skin and affect their breathing. We say that progress is too slow, and they have to stop poisoning children to produce chocolate,” he said.

He pointed out that if companies start paying farmers properly, so they can get a living income, there would be fewer children forced to work in cocoa production and fewer farmers cutting corners with dangerous pesticides.

Attempts by Police to stop our planned picketing through cou...
14 minutes ago