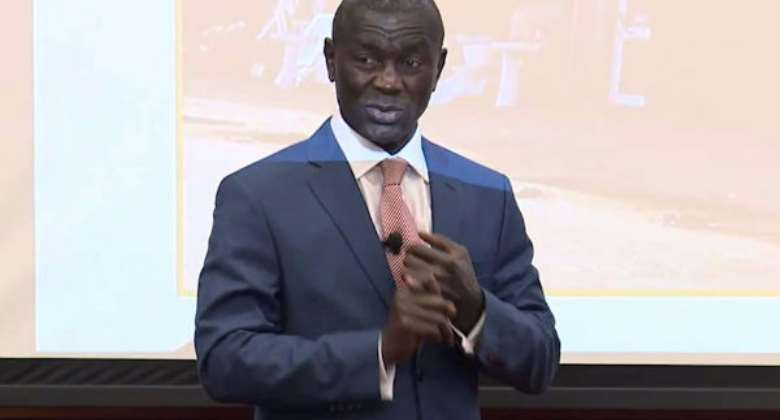 Defunct UT Bank founder Prince Kofi Amoabeng has said President Akufo-Addo is solely to blame for the persistence of the galamsey menace across the country.

In his view, stopping small-scale illegal mining is so easy to do as a President, since he wields so much power under the 1992 Constitution to do so.

However, Mr Amoabeng said he suspects Mr Akufo-Addo is trying to use galamsey to please his party financiers, thus, festering the illegality across the country.

He noted that the president has the armed forces, police, Ghana Revenue Authority and every power needed to fix the country and also stop galamsey.

“We’ve given him all the power as the commander-in-chief of the Ghana Armed Forces and everything”, he stressed, adding: “Blame Akufo-Addo” for its prevalence.

“Use the law to fix the land. Use even the military. This is not difficult. I don’t see how stopping galamsey is difficult. Just declare a two-week curfew in all galamsey areas, let the army use helicopters to mount surveillance on those areas and then put in the necessary measures to ensure galamsey is stopped”, the retired army officer suggested.

When it suggested to him that the illegality is festering because of the involvement of top guns, Mr Amoabeng retorted: “Which power supersedes the President’s to the extent that he can’t stop galamsey even if there are big shots involved?”

“The president has all the powers to stop galamsey and, so, if it doesn’t stop, don’t ask anybody; ask the president. Period! Apart from being the commander-in-chief, he appoints almost everybody and let the people you appoint be accountable and responsible”, he asserted.

He continued: “So, galamsey can be stopped so I don’t see any problem in stopping it. I don’t know [but] who is higher than the president?”

“You see, one thing about Ghanaian politicians is that they are always thinking about votes and they are trying to, maybe, empower some special people who will make money and use the money to gain votes for them; I don’t get it because I’m not a politician but what I know is that, as the president, if you say, ‘I’ll stop galamsey’, he has everything to stop it. Why he hasn’t stopped it, I still don’t understand”, a bewildered Amoabeng said.

A few days ago, President Akufo-Addo said he is not against mining Ghana’s mineral resources but will not accept the prevailing situation whereby it is done recklessly by illegal small-scale miners through which the environment is being decimated.

At a meeting with the national house of chiefs on the subject on Wednesday, 5 October 2022, Mr Akufo-Addo said: “We are not against mining, but we cannot accept mining in a manner that risks destroying our country”.

“Our nation has always been a mining nation. Indeed, in the 15th century, when the first Europeans, the Portuguese, came to our shores, they called the first European-influenced town, El Mina, meaning ‘the mine’ in Portuguese, because, from their ships, as they approached our shores, that is the activity they saw our people engaged in. it is not surprising that, in colonial times, we were called the Gold Coast.”

He, thus, asked all Ghanaians to join hands with him in the fight against illegal mining, in order to bring an end to the devastation of the Ghanaian landscape and the pollution of our water bodies.

“We have to win that fight to keep our environment clean, and protect our heritage for our descendants, as you did in the past,” he added.

According to President Akufo-Addo, “it is obvious that, if we are to win the fight, you and I [chiefs] have to take the lead to collaborate closely to do so. That is why I am here today.”

He noted 80% of the lands Ghana continue to be under the custody of chiefs while the president, per the 1992 Constitution, holds the remainder in trust for the people of Ghana.

What this means, he said, is that, ultimately, the welfare of the state of the lands is the joint responsibility of chiefs and the President, although, by statute, the minerals in the soil belong to the President in trust for the people.

“Historically, we discharged that responsibility well. Even though, for centuries, we have been a mining nation, mining did not pose a threat to the health of our environment and water bodies. The rules that you put in place for mining ensured that the sanctity of our lands remained intact, and our water bodies remained unpolluted. Tragically, in the modern era, that is no longer the case. And that is why I have come to you today to talk about how, together, we can repair this dramatic situation,” he said.

President Akufo-Addo indicated that, since he took office on the 7th of January 2017, he has made it a central feature of his presidency to lead in the efforts to rid the country of the menace of galamsey, with a firm commitment made in his inaugural speech on the matter.

“It has not been easy, it has not been popular, and we have not got the immediate results that I was looking for. Indeed, in the last elections of 2020, my stance on the issue cost my party and me significant losses in the mining communities. It turned out that my statement that I was putting my presidency on the line in the fight against galamsey was neither bombast nor recklessness. It was the simple truth,” he said.

The President continued, “We have tried many initiatives, including that of the Community Mining Scheme, and the establishment of a new legal regime for dealing with the perpetrators of this phenomenon, which has imposed severe sanctions on those, Ghanaians and foreigners, convicted of illegal mining. Still, we have not won the fight.”

In seeking further assistance from the chiefs in addressing the galamsey menace, he noted that taking partisan political interests out of the fight against galamsey is one way forward.

“It can only succeed if it is a truly national battle, which no one seeks to exploit for political gain, as we saw in the last election. The progress of our country depends on all of us, all citizens of Ghana, all Fellow Ghanaians, pulling together to defeat this existential threat to our future,” he added.