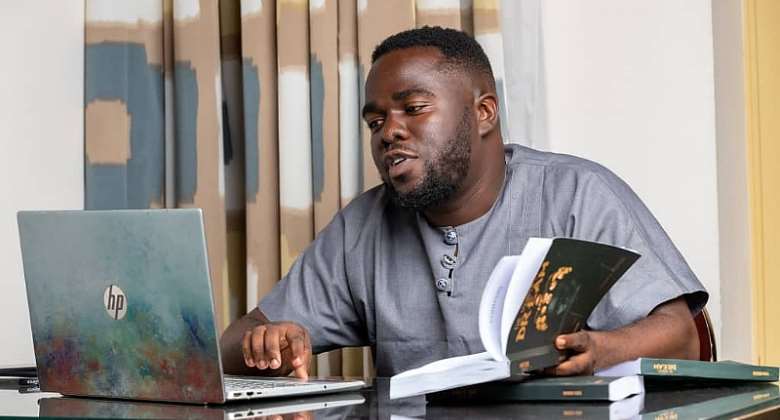 It's been a week since author Yeayi Kobina released his book the Usurper's Dream. He describes the book as an adaptation of Ashanti history but a deeper digging reveals a creation of an epic tale good enough for a game of thrones adaptation.

The author granted an interview at his office, dressed in a hoodie and faded jeans, it is impossible to believe this is the new face of African writers. He smiles when asked how the first week has been since the release of the book. Phenomenal is how he describes it.

The writing project he says was a three year endeavor involving research, writing and re-writing. Yeayi Kobina’s motivation for writing the book was to project a new narrative where Africans were subjects in their own stories instead of objects in the histories of others.

The book, the first in a series of five describes the beginnings of the Ashanti Empire focusing on the two founders Osei Tutu and Okomfo Anokye. From my limited childhood purview, I remember the tales of Okomfo Anokye prowess seeming unbelievable but what the Usurper's Dream does is weave characters that are so likeable-their supernatural abilities is just another extension of themselves.

The cover of the book itself is a testament to the richness of the Ashanti culture. The face of a boy, wearing a golden crown is all that frames the plot of the book.

This book is a topical take and re-capture of the African history in a time when there's been a backlash of Hollywood rip-off of African history and glamorizing it for Hollywood. The writing is fast-paced, creating a world and rich characters one can't help but to root for. The writing grabs you from the beginning until leaving you on a cliffhanger that makes you wonder when the next instalment in the book series will arrive.

The Usurper's Dream can be purchased on Amazon or at the Vidya bookstore.

We expect President to respect the roadmap on Ofori-Atta's d...
53 minutes ago