Rejoinder: Dr Bawumia's Tour In The North: He Describes His Position As A Dirty Job 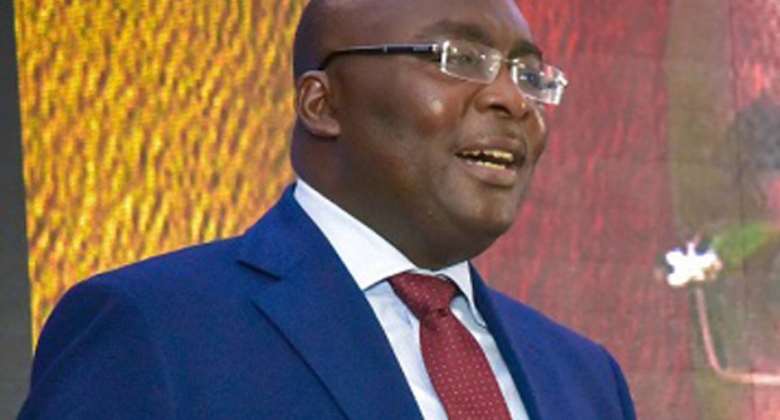 In tandem with President Nana Akufo-Addo administration's key principle to run a retail government that upholds a close bond between leaders and the led, His Excellency the Vice President, Dr Mahamadu Bawumia kickstarted a tour in the Northern-half of the country- the sixth time since the assumption of the reigns of government.

Akin to the tours of the Vice President that has gone past, this tour is designed to felicitate with the people and their traditional leaders, inspect the progress of government commissioned projects and to essentially interact with the rank and file of the party-this is one exercise that rekindles hopes, renews spirits and hones enthusiasm in the ranks of the party. He is staying true to the dictates of his job definition; that is to assist the President to achieve the deliverables of government and by extension nurture the party in the cradle.

At such engagements of the Vice President with partisans both at the Yendi Senior High School in Yendi and at the Northern Regional Coordinating Council in Tamale where I was an active participant with keen interest present in listening, His Excellency sought to douse despondency and encourage them to keep faith with government. He emphasised that his preoccupation at this material moment is how to support his principal to lift the country out of the quicksand. At no point did he make an allusion or insinuation of any flagbearer ambition because for him this is the pristine time to bolster hope in government.

The spin-masters would have none of that. In their overheated imagination and unholy orchestrations, they fabricate puerile propaganda in an unyielding effort to soil the brand-equity of Dr.Mahamudu Bawumia. If a good lie must be cooked up, then it must be done with some finesse and with the ingredient of believability. This subterfuge is too obvious to see through it. A toddler will not buy into such horrendous falsities. You cannot be miserable at building a sound message and be miserable again at concocting a 'beautiful lie'. That's a double-whammy of incompetence.

A Vice President who played and enjoyed his arrowhead role in formalising our economy, fostering digitisation and digitalization in the dispensation of government services, Introduction of Zipline drone technology, Network Interoperability and the mega sinohydro barter trade deal that has impacted greatly on our infrastructure; cannot be accused to have described his job as a dirty job. A Vice President who toiled so hard in the trenches in three successive elections to attain the office of the Vice President cannot be alleged to have described his position as dirty. A Vice President who ticks all the boxes of a performing deputy president and enjoys his role to the hilt cannot be misjudged to have written off his position as dirty. No elementary practitioner in the political space will stoop to the lowest ebb and voice out that let alone attribute it to a Vice President who in a shortest time has seen it all.

The lie is simply a cheap one and you need no rocket-science to unravel what it is choreographed to achieve- a mischievous purpose. From the onset, it could simply be decoded that some wannabe flagbearer has run short of breath way before the start of the race proper and seemingly seeking to release the last weapon from his arsenal, that is religious bigotry and ethnic jingoism. Let the bird whisper to them that this tradition has been nurtured and sustained on the back of progress, unity and diversity. The heterogeneity that existed amongst our forebearers-J.B Danquah, B.K Adama, Jato Kaleo, R.R Amponsah, Victor Owusu, K.A Busia, Yakubu Tali, J.A Braima, Abayifa Karbo, Joe Appiah, B.F Kusi etc- is what has survived this tradition in the face of toxic opposition for almost a century.

Any exponent of the tradition who, for the purposes of parochialism undermines this rich history of our diversity must be called out as a thorn in the flesh of the party and the central spirit of the tradition that has kept us moving. You cannot run behind ethnicity and religion to cover up the deficiencies of your choice.

Without the intent to sound repeatedly ad nauseam; the overwhelming support for Dr.Bawumia is not organised on the back of ethno-religious sentiments. There is NO NORTHERN AGENDA whatsoever. There's only GHANA & NPP AGENDA. We believe it must be DMB because we must sustain our great party and stimulate the growing foothold of the NPP amongst every Ghanaian patch.

The fundamental rationalisation of our choice for Dr.Bawumia is not about his religious suasion, origin and/or ethnic background but strictly because of the content of his character, political flair, the winning formula and grit- the neccesary ingredients required to secure a third consecutive term for our great tradition. That must be placed on record! We adhere to the doctrine that Ghana will be safer in the hands of DMB. Simpliciter!

Hottest Photo Reports
Catch up with all the political quotes from our politicians.
Advertise here
More from Rejoinder
ModernGhana Links
Re: Stop Interfering In The Upcoming Upper West Regional Executive Elections Of The Ndc
Rejoinder: Division looms in NDC USA chapter as executives play monkey tricks with the hosting of the upcoming elections conference
Re: NAGRAT demands withdrawal of new GES Director-General
TOP STORIES