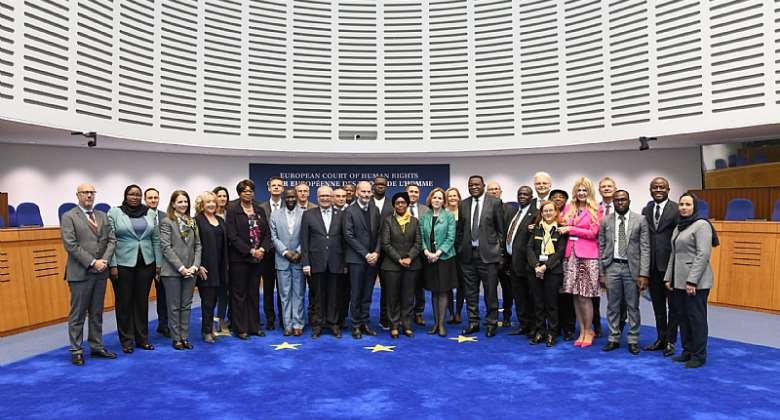 Judges and Officers of the African Court on Human and Peoples’ Rights (African Court) undertook a visit to the European Court of Human Rights (ECtHR) in Strasbourg.

The peer-to-peer bench-marking visit was held by a delegation composed of Judges and Registry Officers of the African Court led by its President, Lady Justice Imani D. Aboud, with a view to build on the existing cooperation, share best practices and enhance knowledge on the regional protection of human rights.

The African Court’s delegation met with the Vice-President of the ECtHR, Justice Jon Fridrik Kjolbro, together with several Judges of the Court and Registry Officers.

Strategic areas of cooperation were discussed in a main opening event during which the two institutions reaffirmed the relevance and context of their outstanding engagement. The bulk of the meeting was yet devoted to various substantive issues ranging from judicial practices to cooperation with states, and knowledge management.

While addressing the African Court’s delegation at the opening session, ECHR’s Vice-President Kjolbro stressed the commonalities in the mandates of the two regional human rights Courts, which, he also noted, encounter similar challenges despite their peculiar socio-political contexts.

He recalled the need to pursue systematic efforts towards greater judicial dialogue by drawing on the existing framework set out namely under the 2019 Kampala and 2018 San José Declarations which also involve the Inter-American Court of Human Rights.

In highlighting the imperative need for dialogue, Vice-President Kjolbro reiterated the ECHR’s practice of drawing inspiration from all relevant international norms and principles – thus including the African Charter on Human and Peoples’ Rights – with an emphasis on converging provisions with the European Convention on Human Rights.

President Imani D. Aboud on her part echoed the sentiments expressed by her host on the shared responsibility of the two Courts to dispense effective and speedy justice to victims of human rights violations. She underscored the need to trade best justice solutions to issues that are domestic in their occurrence but global in the way they affect humanity when justice is not dispensed timely and effectively, or not at all.

While acknowledging efforts to institutionalize judicial dialogue between the three active regional courts, President Aboud insisted on the urgent necessity to take existing agreements to the next level by framing tangible tools and mechanisms for mutual reinforcement based on exchanges that carry an increased capacity to contextualisation.

She recalled the significant inspiration that the African Court gained from the ECHR in building an African human rights jurisprudence, and prompted the ECtHR to look into the fast developing case-law of the African Court in dealing with judicial quandaries that are increasingly converging in both continents regarding issues such as constitutional democracy, self-determination, and civic rights.

The two Courts also shared experiences on the execution of judgments, lessons learnt regarding knowledge management and, lastly on the future of their cooperation.

As the only operational judicial organ of the African Union, the African Court has adopted judicial dialogue as one of the key pillars of its current strategic plan.

This strategic option is geared towards achieving its mandate to effectively protect and enforce the rights guaranteed in the African Charter on Human and Peoples’ Rights and other applicable international norms.

In this regard, this peer-to-peer visit served as one of the activities intended to pursue judicial dialogue in a systemized manner.

In concluding their exchanges, the two institutions alluded to importance of continued dialogue on all platforms including virtual and physical.

They agreed to develop a plan for exchange of judges and staff and also to widen the network of cooperation to other international tribunals which do not have a direct mandate of human rights but nonetheless engage in the protection of human rights and development of its norms.