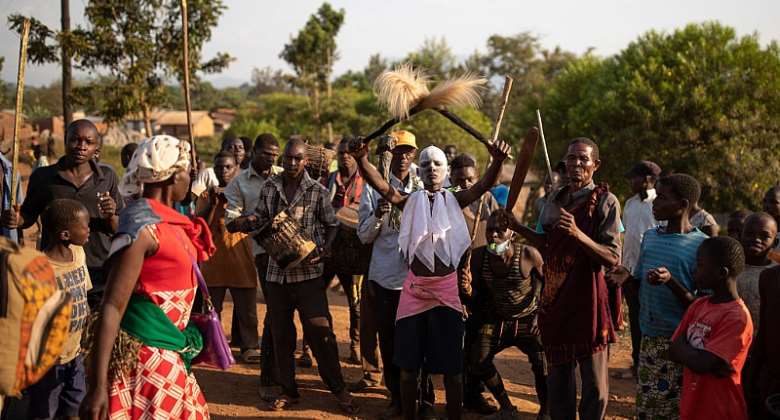 Amirr (centre) parades though his village ahead of the imbalu circumcision ritual. Imbalu begins with dance and music, as initiates visit relatives and friends to receive gifts. - Source: Luke Drey/Getty Images

Music, dance, drama and poetry are important elements of ritual in African societies. Imbalu, the centuries-old circumcision ritual of Uganda's Bagisu people , is no different. When Bagisu boys between the ages of 16 and 22 undergo this initiation into manhood, they learn the ancient meaning of the practice through music and dance.

Imbalu takes place every even year in August in the remote districts of eastern Uganda close to the border with Kenya. Imbalu ceremonies are not only staged in homes, but also in public spaces. Here, a broader audience witnesses the special dance and music performances.

In previous studies , I have examined these performances. Music and dance are integral from the moment a boy declares he is ready to be initiated until he performs inemba, a final dance marking his return to society.

My most recent study looks at how imbalu music and dance performances act as platforms where boys are tutored about their society's gender ideology, history and ritual practise. The public performance of these rituals at a sacred place called the Namasho Cultural Site is like a communal classroom where community members attending also share what they know of their history, identity and values.

But imbalu, like other cultural performances among the Bagisu, has been affected by fewer and fewer boys undergoing initiation. Hospital circumcision has become more common, and Christianity, Islam and western education have negatively impacted uptake. Many Bagisu who have adopted western religious practices look at imbalu performances as something of a cult and consider these rituals to be “backward” and “primitive”.

As a result, there is a risk that the music and dance created, performed and transmitted through cultural sites like Namasho at ceremonies like those staged for imbalu will be lost to future generations. However, they are valuable to the community since they transmit social histories, help form identity and teach social values. They should be documented and archived without delay to preserve traditional knowledge for use by future generations.

The initiate and his family and community members all take on different roles during imbalu performances at Namasho.

The site, in Bududa District, stretches from the local school to the confluence of the Manafwa and Uha rivers. It is known as a place where wars were fought, and where fetishes of medicine men and women were dumped during the precolonial period. (Fetishes, in the form of calabashes or gourds, are objects kept by diviners or traditional healers to give them supernatural power. When they didn't have successors, such objects were disposed of.) These histories are part of what is taught in the rituals performed at this sacred site.

Different forms of music are played during imbalu. Khukhubulula is one form. The boy, surrounded by friends and relatives, sings songs praising himself, his family and his clan. These are usually composed by him some months earlier. Some songs will praise his girlfriends, as marriage is the phase that follows imbalu among traditional Bagisu.

Then there are bibiwoyo, coaxing songs usually led by men. They use titles like umwami (chief), umukoosi (the one with respect) or umusani (man) to encourage the boy to go through with the circumcision. The community demonstrates to the boy that he will become a “powerful” person in society if he gets circumcised. Members of Yoyo Toto Wambale music group pose for a photo before performing at an imbalu ceremony. Badru Katumba/AFP via Getty Images

Then there is kadodi music and dance. Accompanied by five drums, kadodi is performed to accompany initiates as they visit cultural sites and relatives. At Namasho, it entertains initiates and visitors besides also enabling some initiates to meet and interact with girls who may be future marriage partners. Kadodi is so popular at Namasho that bands come to play just to advertise themselves. Moreover, although the isonja dance is displayed earlier in the year, it is sometimes brought to this sacred site to give expert singers an opportunity to advertise themselves to future candidates who hire them to learn how to compose and sing songs.

Lastly, groups congregating at Namasho play prerecorded imbalu songs, produced in a studio or recorded live at the event in previous years. This is meant to entertain candidates but also remind circumcised men about the vows about manhood they made during their own ceremonies, including the need to defend and provide for themselves, their families and the broader community.

Music and dance turn Namasho into a communal classroom for imparting indigenous knowledge and history. Some performances, for example, tell the story of Nabarwa and Masaaba , the woman and man who are believed to have introduced imbalu among the Bagisu. Mythical narrative has it that Masaaba, who met Nabarwa and asked for her hand in marriage, was asked by her to be circumcised before they could marry since she came from a circumcising community. When the Bagisu refer to themselves as Bamasaaba, they explicitly mean that they are children of Masaaba. The relationship between Nabarwa and Masaaba is used as testimony that women and men in this community should play complementary roles.

Read more: How sacred sites act as living archives in a Ugandan community

Another song is about Lutseshe, a famous forefather. In singing this song, the community reminds the initiates about the need to produce children to fill Lutseshe's land. As boys sing, some spectators will advise them to be assertive and objective if they are to manage their households well.

Through the interaction between women and men as they perform these rituals, their mutual roles in society are underscored. For example, as an initiate sings, his sisters and other female relatives are at the centre of responding to the songs, symbolising the need for women and men to work together on daily activities.

Acts like being smeared with clay from the sacred swamp are a reminder of the history of those who came before.

In the face of the threats to traditions like imbalu from social change, it is crucial that this knowledge be preserved for use by future generations.

Stakeholders like the Uganda Tourism Board, Bududa District local government and academic archives, like Makerere University's Klaus Wachsmann Audio-visual Archive , need to work together to record and preserve these musical and dance materials.

Imbalu will then continue to offer its lessons to the Bagisu and help maintain their rich cultural identity.

Dominic D.B. Makwa does not work for, consult, own shares in or receive funding from any company or organization that would benefit from this article, and has disclosed no relevant affiliations beyond their academic appointment.

What again do you have for Ghanaians besides economic theori...
45 minutes ago