Otumfuo Needs to Get Real and Darn Serious about Galamsey Menace 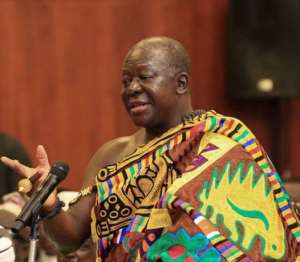 His Majesty, The Asantehene, Otumfuo Osei-Tutu, II, needs to cut his morally and economically deleterious nostalgia about the age-old tradition and existence of the small-scale mining industry, also known as Galamsey, and sit up and promptly help our politicians find an effective and lasting solution to this predatory and inexcusable environmental hazard. Nanapanyin Osei-Tutu is widely reported to have said, during a courtesy call on him by Ms. Virginia Palmer, the American Ambassador to Ghana, that small-scale-mining is something that has been done for generations but never to the detriment of the environment (See “There Are Powerful Forces Behind ‘Galamseyers’ – US Ambassador to Otumfuo” Ghanaweb.com 10/3/22).

This is obviously the observation and the statement of a major Ghanaian monarch who has not paid adequate attention to the wanton environmental degradation wreaked by Galamsey in the recent past. If he had ever set foot on the Atiwa-Atweredu Hills or Mountain Range, located between Akyem-Asiakwa and Kwabeng, in the Eastern Region, where this writer grew up in the late 1960s and most of the 1970s, Otumfuo Osei-Tutu would be more sober and meticulously measured in his observation and with his rather dangerously smug statement, especially if he had ever come across some of the dozens, if not scores, of abandoned shaft-mine pits that continue to remain death traps to unsuspecting farmers and users of Atiwa forestry resources.

I suppose what Otumfuo Osei-Tutu deliberately ignores or conveniently fail to realize is the fact that relative to the present ecological toxicity or toxification wreaked on the country’s waterbodies and forestry resources, Galamsey activities of yesteryear appear to have been benign and almost environmentally harmless because they were largely confined to lands relatively far removed from our riverbeds, unlike the overwhelming majority of Galamsey activities in our day and time which tend to be almost invariably confined to the country’s most important waterbodies and forestry resources. Plus, the fact that these days advanced technological know-how has facilitated the wanton and reckless use of such deadly chemicals as cyanide and mercury than was known and were used in the past. Now, couple the foregoing with the exponential increase in our human population, and the latter’s attendant pressure on our lands, waterbodies and forestry resources, which Otumfuo Osei-Tutu apparently fails to recognize, and the immediate and imperative need for the total ban of Galamsey, as diplomatically adumbrated by Ambassador Palmer, could not be more unquestionable.

It has also not helped matters the least bit that barely a year after imposing a total ban on the Galamsey cottage industry, President Addo Dankwa Akufo-Addo would make the decidedly counterproductive turnaround of inadvisably insisting that small-scale mining was a normative global industrial enterprise that needed to be strongly encouraged, rather than expressly proscribed, even when all the indicators pointed to the fact that on a balance, Galamsey was wreaking far more irreparable damage to Ghana’s ecology than raking in any worthwhile economic benefits. Which is why The Asantehene cannot be taken even half-seriously, when Nana Kwaku Duah Tutu wonders why in spite of the fact of President Akufo-Addo’s having put his political career on the line vis-a-vis the epic battle against the pernicious impact of Galamsey on the country’s environmental resources, the battle seems to have miserably failed.

Well, the fact of the matter is that Nana Akufo-Addo never really put his money where his mouth was vis-à-vis his massive electioneering-campaign promise to thoroughly eradicate the Galamsey Menace. The Asantehene may also need to soberly let the global Ghanaian community in on what he knows or has known about the criminal collusive shenanigans between Mr. Sam Jonah, His Majesty’s publicly proclaimed bosom friend, and the Western entrepreneurial principals of the former Chief Executive Officer of the Asante Goldfields Corporation (AGC) that resulted in the loss of some $ 600 million (USD) in revenue to the Ghana Government and, by logical extension, the Ghanaian taxpayer some 20 years ago. The need for such prompt public disclosure has become necessary because within the past year or two, for example, the Queen Elizabeth, II-knighted Sir Jonah has been traipsing the length and breadth of the country smugly and pontifically faulting President Akufo-Addo for being singularly and uniquely responsible for the dismal economic state of the country.

Now, scapegoating the proverbial “Little Man from Kyebi” will not help Ghanaians grab the metaphorical bull by the horn, by equally objectively and squarely holding each and every one of our major leaders and politicians responsible for the myriad of socioeconomic problems plaguing the country and condignly ensuring that each and every one of these self-serving and unconscionable nation-wreckers dearly pay for the same.