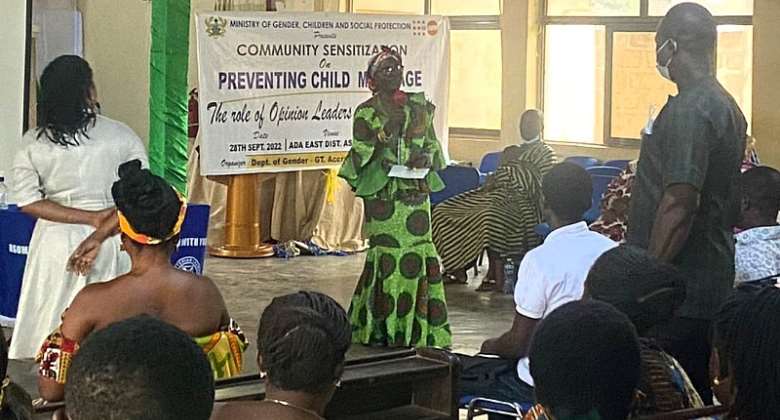 Madam Matilda Banfro, Greater Accra Regional Director Department of Gender has disclosed that the Ministry of Gender, Children, and Social Protection has rolled out community engagement programmes to educate the gild-child, boy-child, parents, and the larger community to protect children.

She said the Gender Ministry is working with strategic partners toward eradicating child marriage and commended the role traditional and religious leaders are playing to end child marriage in the country.

Madam Banfro was speaking at a workshop on child marriage for Ada residents which seeks to educate the people to understand the dynamics and impact on society on child marriage, which was monitored by the Communication for Development and Advocacy Consult (CDA Consult) in Ada.

The programme which was sponsored by the United Nations Population Fund (UNFPA) brought together traditional leaders, Assembly Members, Civil Society Organizations, and Non-Governmental Organizations from the local community, as well as the National Commission for Civic Education, and Girl Child Coordinator among others.

She said the Gender Ministry is committed to providing girls with the necessary tools including education to fight for their rights and make informed decisions about their lives.

Madam Banfro defined child marriage as a formal or informal union entered into by an individual before reaching a certain age, specified by some global organizations as high as the age of 18.

She mentioned that many young boys and girls get married before they can reach the age 18 and the most affected are girls saying the act takes place for a number of reasons.

He said the act robbed the affected girls of their dignity and also prevented them from realizing their full potential and contribution to society.

She said the Criminal Offense Act, 1960 (Act29) section 109 criminalizes compulsion marriage, and section 97 stated that whoever commits rape shall be guilty of a first-degree felony and called on stakeholders to help end child marriage in the country.