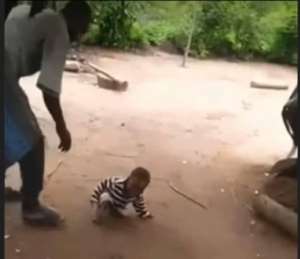 The Ministry of Gender, Children and Social Protection has condemned the assault on a toddler which was captured in a viral video.

The Ministry urged the general public to be vigilant and report persons who engage in such practices to the Police for arrest and prosecution.

“We commend the Ghana Police Service and Child Right International for launching a manhunt for the suspect in the matter.

“The Ministry therefore appeals to the general public to support the Police with any information that will aid in the arrest of the man.”

The Police have assured that they are tracking a man who was seen in a viral video abusing a child.

An unidentified man is seen lashing an infant with a stick.

The Police said in a statement on Tuesday October 4 that they have sighted a horrifying video on social media in which a male adult is seen subjecting an infant to severe beating under a tree.

“Efforts are underway to track down the individual involved, have him arrested and rescue the child.

“In view of the urgency associated with the matter, a reward of GHC2000 has been set aside for anyone who is able to provide credible information that could lead to the arrest of the individual and rescue the child,” the statement said.