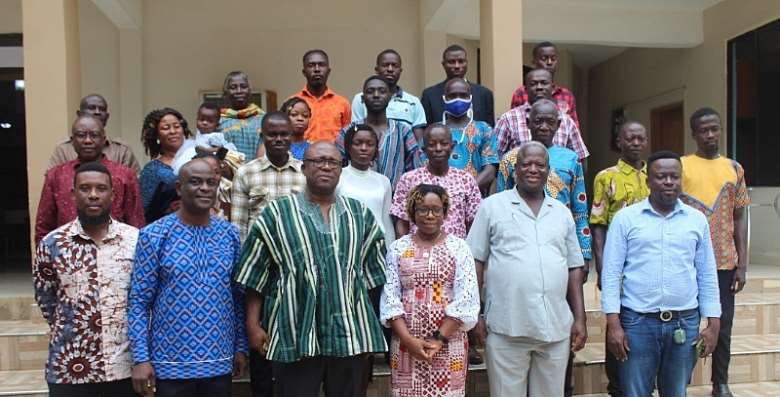 A day’s capacity building workshop for more than 30 Community-Based Advisors (CBAs) has taken place at Abesim near Sunyani in the Bono Region to beef up their knowledge and skills on best agricultural practices.

The Ministry of Food and Agriculture (MoFA) organised the training programme for the 30 CBAs, who are part of the 1,120 beneficiaries trained and deployed in 14 districts in Bono and Bono East regions in 2019.

The CBAs are mandated to partner with the Agriculture Extension Officers (AEOs) to educate farmers on best agricultural practices to increase food production and reduce post-harvest losses.

The beneficiaries are trained under the Ghana Extension System Strengthening Project (GESSIP) and funded by Alliance for a Green Revolution in Africa (AGRA).

The GESSIP Project was implemented by the Hunger Project-Ghana in Partnership with Directorate of Agricultural Extension Services (DAES), Farmer Line and the District Departments of Agriculture.

The Director of Agric Extension at MoFA, Paul Siameh, said the country has continued to register a gradual declined in the number of Agriculture Extension Agents (AEAs) in recent past.

He explained that between 2018 and 2019, the government recruited 2,700 AEAs to improve the number of the AEAs in the country to support farmers and other value chain actors.

Mr Siameh said despite the recruitment, the ministry still realised that there were shortfalls of the AEAs in the country, which necessitated for the formation of CBAs to support in extension services.

He said MoFA had worked with some of the CBAs since 2018, because their services were crucial in the agricultural sector.

Mr Siameh said the training was necessary to help improve their skills and kept them updated on the current agricultural practices and issues.

The Director, Partnership Building and Resource Mobilisation of the Hunger Project Ghana, Isaac Olesu-Adjei, said the CBA module sought to address the extension knowledge gap that existed among small-holder farmers, resulting from the high farmer to extension office ratio.

He said the CBA approach also sought to reduce the high level of unemployment among the youth in areas.

Mr Olesu-Adjei explained that the CBAs were trained to support Agricultural Extension and Advisory Services (AEAS) in delivering last mile extension service to small-holder farmers in the communities they lived.

He said their focus was on improving farming practices and facilitating access to agro-input as well as output aggregation and marketing.

Mr Olesu-Adjei said the CBAs had also been trained in the entrepreneurships to enable them develop agro-businesses as they deliver services along the entire agricultural value chain.

He said the recognition of the CBAs marked an important milestone in their collective efforts to institutionalise and integrate the CBA Concept into the national extension System.

Mr. Olesu-Adjei said the district offices of MOFA accepting the CBAs and working with them was keep to their sustainability, boost their confidence level and feel secured to work.

“Most importantly, formalising the work of the CBCs will help to instill the needed confidence in farmers and encourage them to make use of the services provided by the CBA”, he added and charged them to consult the AEAs often and work closely with them.

For his part, the acting Regional Director of Agriculture, Mr Denis Abugri Amenga, encouraged the CBAs to give off their best in the discharged of their duties.

He said farmers would feel comfortable working with the CBAs, because they were in the same communities with them.

Mr Amenga thanked Hunger Project Ghana, MoFA, AGRA and Farmer Line for their support in the agriculture sector to improve the delivery of extension services.