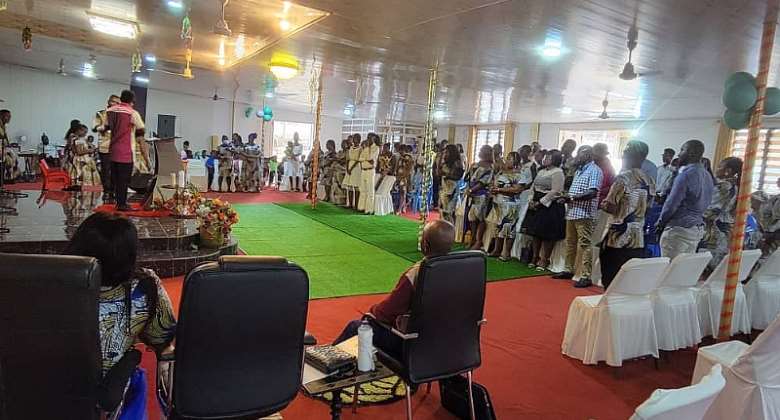 Crystal Grace Chapel International celebrated its 9th anniversary since its inception in 2013 with a three-day anniversary programme dubbed "Divine Shift."

The church, led by Prophetess Lina Biney and Rev. Patrick Biney, has grown gracefully in the last five years since it was relocated from its original location to Sarpeiman, near Amasaman in Accra.

Several Christians, both members and non-members, attended the church's anniversary programmes on Thursday and Friday, September 9 and 10 and then on Sunday, October 2 for the grand finale.

During the celebration, the church's leaders and members, as well as the guest speaker, Apostle Nat Opare Yeboah, expressed gratitude to the Almighty God for giving them another year and protecting them over the years.

Elaborating on the theme chosen for the anniversary, "Divine shift" on the last day, Sunday, October 2, Apostle Nat Opare Yeboah, the guest speaker, revealed that maturity is the best way to attain a better shift in life as a Christian.

Delivering a sermon themed "fruitfulness" he explained " the blessing of God is when the seed of God's words is planted (Genesis 1:28)," adding that such blessings are not to be given to men who walk in the way of the ungodly because such people will never prosper, unlike those who avoid bad company.

He explained the significance of the number twelve in the life of a believer by referring to the biblical incident in which Jesus Christ healed a woman who had been bleeding for twelve years and also resurrected an already declared dead 12-year-old child.

The revered preacher revealed that 12 is a special number that represents maturity as well as foundation and systems in a Jewish translation, which is what every Christian requires to succeed in their endeavour.

The congregation was reminded once more not to underestimate the essence of God's life, which is a sign of maturity because hard work alone does not produce positive results.

“Your mistakes are a reflection of your immaturity. And when you fail to exhibit maturity, God also treats you like a child,” he said, adding that “Christians must always act mature so that whatever you do will be blessed by God for it to be fruitful."