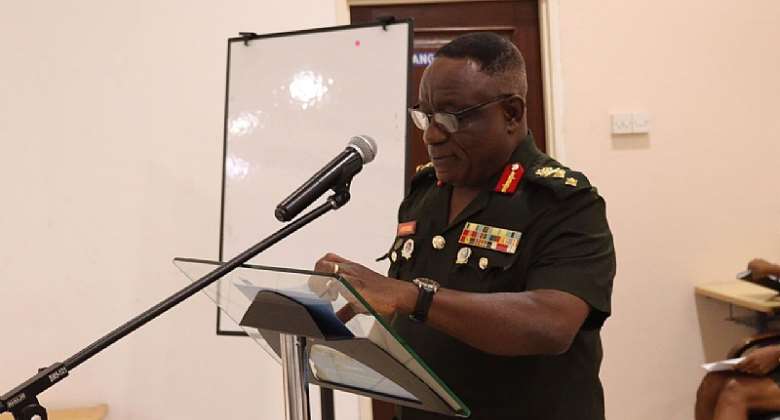 According to him, it is a sure way of building lasting peace on the continent.

Major General Francis Ofori disclosed this during an address to declare open the workshop on the role of Coercion in Peacebuilding; Insights from Africa in an Inter-Regional Perspective.

The three-day workshop started on Wednesday, October 5, and is expected to continue on Thursday before its climax on Friday, October 7.

In his address, Major General Francis Ofori said “the idea to build lasting peace in the African continent has necessitated this very important three-day workshop. This quest will however come to nothing if we fail to share experiences and harness our collective efforts at conceptualizing coercion, and the role of coercion in peacebuilding, focusing on interventions by traditional actors, non-traditional actors, and regional organizations in peacebuilding.”

The three-day workshop has been put together to provide a platform for robust engagement on coercion in peacebuilding, and particularly to accentuate issues concerning different theoretical and methodological approaches to coercion, drawing on empirical case studies with a focus on regional organizations, traditional and non-traditional actors in peacebuilding.

The workshop being hosted by KAIPTC is being organised by the Peace Research Institute Frankfurt (PRIF) in partnership with the Institute for Peace and Security Studies (IPSS).

The outcome of the three-day workshop will draw on the experiences of the international researchers, who have been invited from various countries to share and discuss insights from Africa from an interregional perspective.

The outcome of the workshop will be shared with key actors in peacebuilding.

Commenting on the work of KAIPTC, Major General Francis Ofori assured that his outfit remains committed to the giant strides made by the United Nations in the area of the Security Council Resolutions 2282 (Gender dimension of peacebuilding, including youth - 2016), 1325 (WPS Agenda - 2000), 2535 (Youth, peace, and security -2020) and 2250 (Thematic resolution that deals with the topic of youth from an international peace and security perspective – 2015).

He disclosed that the efforts of KAIPTC are also geared towards the promotion and implementation of the African Peace and Security Architecture (APSA) and the Maputo Protocols.

“We also continue to deepen our collaboration with ECOWAS in operationalizing the WPS Agenda in the sub-region and Africa as a whole for advancing sustainable peacebuilding efforts,” Major General Francis Ofori added.