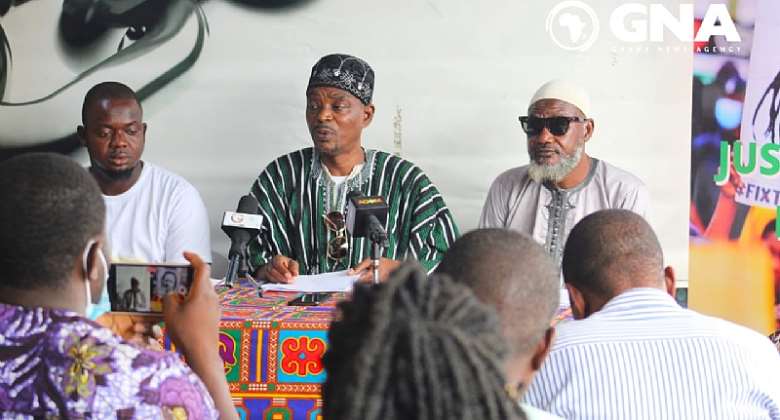 Families of victims of the Ejura shooting incident say they are yet to receive compensation from the Government despite a recommendation by the Ejura Committee.

The Independent Committee, constituted by the Minister of Interior, recommended, among others, adequate compensation to be paid to the injured persons, Louis Ayikpa, shot in the intestine; Awal Misbau, who lost his leg, and Nasif Nuhu, who sustained injuries.

“Till date, none of the injured persons have received compensation,” Alhaji Inusah Bawah, Chairman, Joint Committee of the Victims of the Ejura Incidents, emphasised at a press conference in Accra on Wednesday.

On June 26, 2021, Ibrahim Mohammed Anyass, alias Macho Kaaka, a citizen journalist and “Fix The Country” activist, was attacked by unknown assailants at Ejura around 0130hours.

Following his death, the youth of the community protested, which turned violent as they clashed with security personnel detailed to maintain order, leading to the shooting of the two - Abdul Nasir Yussif and Murtala Mohammed.

The Joint Committee of the Victims of the Ejura incident said: “After several months of back and forth, they asked all the victims to attend a medical examination at Komfo Anokye Hospital, at their own expense. Then they asked us to submit medical receipts. All of those were submitted. We received no letter acknowledging that they had received the receipts.”

The families, speaking through the Joint Committee said, so far, the families of the deceased had been paid GHS250,00.

The Joint Committee said its lawyers had followed up on two separate occasions to no avail and that it had not heard from the Attorney-General's Department after letters were sent to follow up on steps taken to pay compensations to the victims.

Like the victims of the Ejura incident, the Ejura Committee in its report, submitted a month after the shooting incident on July 27, 2021, also recommended adequate compensation to be paid to the families of the two persons who were killed.

Sahada Hudu, the wife of the late Ibrahim Mohammed Anyass, said she had been left helpless, vulnerable and psychologically distraught by her husband's passing.

Shedding tears and receiving consolation from other family members as she narrated her story, she said she was fending for the children singlehandedly.

Agatha Doyina, the mother of Louis Ayikpa, who was shot in the intestine, said she had literally expended all her money on medical bills unaided.

She said even though his son, now 17, was able to move about, he had been impaired as he was unable to do any work requiring physical strength.

For her, adequate compensation from the Government as recommended by the Ejura Committee would give her some reprieve as she continued to nurse him to full recovery.

Mr Oliver Barker Vormawor, Lawyer of the victims and Convenor of “Fix The Country”, said despite the findings of the independent Committee, all culpable persons were still walking free.