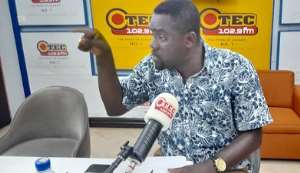 The Atwima Nwabiagya North Constituency Secretary of the New Patriotic Party (NPP) has called on Metropolitan, Municipal and District Chief Executives (MMDCE's) to boldly come out and declare their commitment to the fight against galamsey in Ghana.

His comments come after the National House of Chiefs led by their President Ogyeahohuo Yaw Gyebi ll pledged its support to the fight against galamsey to curb the devastation caused to lands and water bodies.

"Mr. President, your relentless war waged against forest degradation and illegal mining in Ghana is of great importance to Ghanaians. The effects of illegal mining on the environment are a threat to water bodies, farmlands, and the cocoa industry and even encourage school dropouts as well as undermine the revenue mobilization drive of the country.

"In view of this development, Nananom are solidly behind your administration to apply the appropriate sanctions against persons involved in galamsey irrespective of their status," Ogyeahohuo Yaw Gyebi ll read in his welcome address to President Akufo-Addo during an engagement in Kumasi on Wednesday, October 5.

Reacting to the statement, Raphael Osei-Wusu charged MMDCEs in the country especially those in mining areas to follow suit and publicly make their stands clear in the fight against galamsey.

Speaking on Otec FM's afternoon political talkshow dubbed 'Dwaberem' on Wednesday October 5, 2022, Raphael Osei-Wusu told host Dr. Cash that "What the National House of Chiefs have done shows they have come to understand the need for all Ghanaians to come together and fight the menace and I expect the MMDCE's to do same if indeed they are ready to help this fight."

According to him, MMDCE just like Chiefs are major stakeholders in their various areas and therefore making their stands known would be a great move and can even scare illegal miners from venturing into such areas.

"So Dr. Cash, if MMDCEs as heads of security in various Assemblies decide to join hands and do as Nananom have pledged to do, I don't think anyone will have the balls to dare go there to do galamsey," he emphasised.