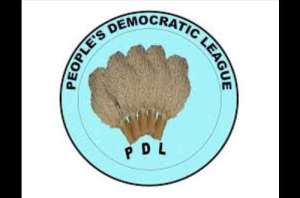 When the Political Parties Registration Commission (PPRC) disenfranchised members of the People’s Democratic League, and prevented us from participation in the 2018 general elections, we didn’t lose heart and started preparing the next battle for our full participation in the 2023 general elections. Every day is a new step and new challenge, no matter who are behind this brutal injustice, we are confident that God is greater than any force on earth. Though some politicians in Sierra Leone believe there is no God in politics, so they can do and undo things as they whim and wish, we know they cannot change the will of God.

There are political parties today in many countries around the world which are run, managed and controlled by people who cherish and love peace, democracy, freedom and justice. The People’s Democratic League was built on those principles, and we cannot compromise them to the whims and wishes of desperate people, who are hell-bent on sowing the seeds of tribalism and regional divide politics in Sierra Leone.

We believe it is not the policy of the elected Government of President Maada Bio to close the democratic space to a group of Sierra Leoneans, whose leader belongs to the wrong tribe. It is on record that President Bio has on numerous occasions made Sierra Leoneans to understand that he is not a President for one region or one tribe, but a President for all Sierra Leoneans living everywhere. The President has also assured members of the international community that his Party has a tradition and he won’t be the one to break that tradition. That is to say, his government will defend the human rights and democratic freedoms of every Sierra Leonean, regardless of tribe, region or political affiliation.

The PDL is not defending the President or his elected Government, but the truth is always the truth and must be said. Sierra Leone cannot thrive in an environment of sabotage, suspicion, hatred, division and distraction. This is where Sierra Leone has finds itself today, where the President says one good thing then others do the wrong things. This is not good for Sierra Leone and we want the President and our international development partners to act in order to save our democracy.

The 1991 multiparty Constitution of the Republic of Sierra Leone guarantees the rights of every Sierra Leonean to participate in the democratic process without any intimidation or obstruction of any kind. The PPRC hatreds, intimidation and discrimination towards the PDL are both ethnic-driven and regional-driven political decision. Nowhere in the ECOWAS sub-region do we have a political party waiting for more than six (6) years to be registered and participate in the democratic process.

This policy of exclusion is slowly killing our democracy, we want the elected Government of President Maada Bio and the larger international community, including the good Office of the United Nations Secretary General, the British Commonwealth, African Union, the European Union, the League of Arab States, the Organisation of Islamic Cooperation, ECOWAS to know and take appropriate action to see that there is a level-playing field, for the free, peaceful and credible conduct of the 2023 elections.

We believe after the demise of the One Party rule, Sierra Leone is no longer a dictatorship that had held the country under the manipulative mechanism of one tribe. Sierra Leone, like any other nation on earth belongs to God, and the right of Sierra Leoneans to register political parties is a gift from God, which every Sierra Leonean must enjoy equally without intimidation. The right of PDL and its members to participate in the democratic process is a right we cannot afford to forfeit.

The People’s Democratic League is a diverse political Movement, where all Sierra Leoneans are welcome without any discrimination on grounds of tribe, region, religious belief or cultural background. Targeting PDL for exclusion in the democratic process because it leader is a Temne is a serious attack on all ethnic groups in Sierra Leone; attack on one is an attack on all. As a democratic country, we must not hide behind State Institutions to deprive the people of their human rights and democratic freedoms. Targeting the PDL because of who it leader is, what tribes it leader belongs to, what it leader looks and where it leader comes from is, and always will be, dangerous and deeply anti-Sierra Leone.

The PDL has a role to play in what happens next in Sierra Leone. We can exercise our inalienable rights by marching on the streets and we can exercise our voting power at the polls. We will do what we know works when dehumanisation takes over dignity. We will organise peacefully and ask if we are not citizens of Sierra Leone, and if it is in the Constitution of Sierra Leone that no Temne person can lead Sierra Leoneans to register a political Party in the country. We have resisted prejudices of the past One Party rule, and not now that we are in a multiparty democracy.

Members of the PDL will continue to address their concerns to the Sierra Leonean public and to the international community. However, despite over six (6) years of experience and efforts to get our final registration certificate, and despite also President Bio’s political will to defend and promote the human right and democratic freedoms of every citizen of Sierra Leone, whether inside Sierra Leone or outside Sierra Leone, the PPRC is still ignoring our demand to issue our final registration certificate, even when elections are less than a year away. This is unacceptable.

You can delay our registration process, but you cannot delay destiny. If a country like Iraq can hold elections without any complain of exclusion, so can Sierra Leone. The exclusion of the PDL in the 2018 general elections, we want to say, the PPRC destroyed the soul of Sierra Leone with its act, which has since then been a blemish on its own reputation. The PPRC should reconsider its tactics before its image at home and abroad is hopelessly ruined, with all the attendant consequences.

We believe President Maada Bio is a listening leader, who may not want anyone to stain the mandate given to him by the people of Sierra Leone.

The PDL was established and declared on 7th April, 1986. It is a grouping of young, patriotic-minded, forward-looking, new crops of leaders, who feel for their people, their communities and their country and with great responsibility for humanity. Our adversaries often referred to the PDL as a country Party because of our uniqueness and politics’ style.

Of course we are a country Party. Our members are not unaware that the achievement of social and economic justice could only be possible through the involvement in the political activities, in sharing of power and addressing the demands and aspiration of the Sierra Leonean people. It is only in the PDL that all tribes and ethnic groups that made up of the sovereignty of Sierra Leone sit together and discuss issues that concerned all Sierra Leoneans.

Unless and until our politicians think they are leaders who supposed to work for the good of the people, there will always be cracks on the political walls, whereby the people will no longer feel safe, but feel betrayed by those they entrust the governance of the country. Our politicians have been playing ethnic politics by sacrificing the good of their followers on the altar of self-aggrandisements. These politicians who say God is not present in politics are doing a disservice to the Sierra Leonean nation, forgotten that Sierra Leone belongs to God, and to God that life exist; and where there is no life, your politics ends in the cemetery.

May God save Sierra Leone!

For and on behalf of the People’s Democratic League (PDL)