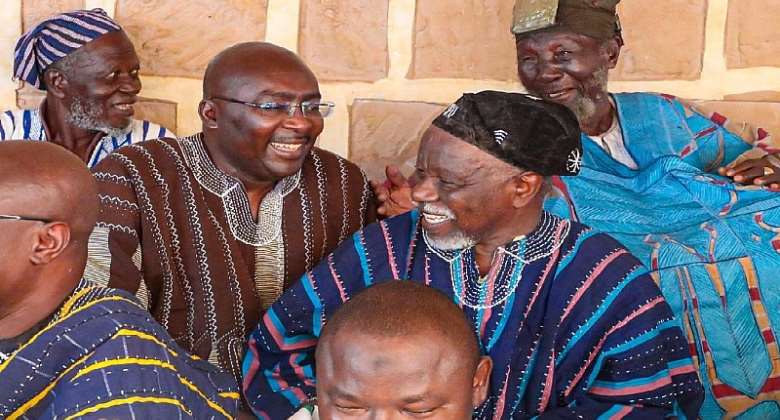 The Overlord of Mamprugu, Naa Bohagu Abdulai Mahami Sheriga, has expressed deep appreciation to the Asantehene, Otumfuo Osei Tutu II, and other chiefs around the country for protecting their son, Vice President Dr. Mahamudu Bawumia.

The Nayiri welcomed Dr. Bawumia and his delegation, made up of members of government from various parts of the country, to his palace on Tuesday morning, before the Vice President commenced his working tour of the North East Region.

As members of the Vice President’s powerful delegation were introduced one after the other, the Nayiri realised that the delegation was made up of people from different parts of the country.

To the members of the delegation, the Nayiri urged them to continue to work together with the Vice President until the right destination is reached.

Expressing gratitude to all present and Chiefs for supporting the Vice President to serve, the Nayiri delivered a special message to the Asantehene, through members of the delegation from the Ashanti Region.

“The Asantehene is a blood brother to the Nayiri and a very good friend. Each time they are together and they speak the same language. So those of you from Ashanti, when you get back, go to the Asantehene and tell him that his brother, his friend extends warm greetings to him and expresses his gratitude to him for protecting our son. I also request his continuous support for his son so that he can get to where he wants to get to.”

The Nayiri urged Dr. Bawumia to continue to work hard in service to the nation, assuring that God will reward his efforts.

The Vice President has been on a working visit to the Region since Sunday. After spending two days in the Northern Region, he started the a tour of the North East Region.

Members of his delegation is made up of Ministers, MPs, Senior Government and Party Officials, former party executives and other party stalwarts.

You’ve been a dependable husband – Lordina celebrates Mahama...
18 minutes ago