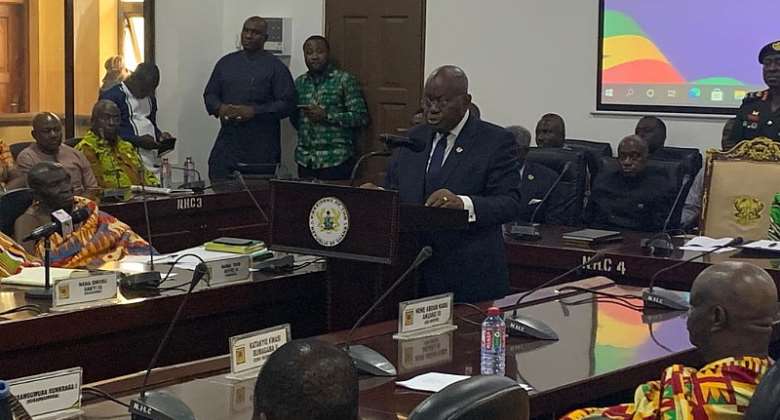 President Nana Akufo-Addo has expressed how difficult the fight against illegal mining, also known as galasmey has been under his government.

Addressing the National House of Chiefs on Wednesday, October 5, 2022, the President said the fight against illegal mining has been prominent on his list since he assumed office.

“Since I assumed office in 2017 I have made it a central feature of my presidency to lead in the efforts to rid our country of this menace, which we all now call galamsey. Indeed, it was an important aspect of my inaugural address of that day.

“It has not been popular, and we have not got the immediate results that I was looking for,” he added.

President Akufo-Addo said the view he made to fight the menace five years ago cost him and the NPP “significant losses in the mining communities” during election 2020.

“It turned out that my statement that I was putting my presidency on the line in the fight against galamsey was neither bombast nor recklessness. It was a simple truth.”

The President is nevertheless committed to fulfilling the promise he made to Ghanaians to bring an end to the menace.

“I ask you all to join hands with me in the fight against illegal mining, in order to bring an end to the devastation of our landscape and the pollution of water bodies. We have to win that fight to keep our environment clean and protect our land and waters,” he told the chiefs.

President Akufo-Addo in July 2017, in a similar forum against illegal mining, organised to get Ghana’s chiefs involved in the fight against galamsey put his presidency on the line for the fight. He vowed to stop the menace, even if he ends up losing the presidency.