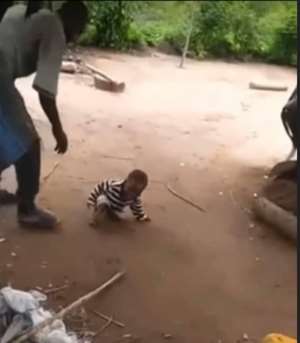 Child Rights International has commended the Ghana Police Service for its swift response in tracing the identity of the man captured in video beating an infant.

The video which has gone viral has a man subjecting an infant to severe beatings under a tree.

The Ghana Police Service is currently on a manhunt to fish out and deal with the man in the video.

“Efforts are underway to track down the individual involved, have him arrested and rescue the child," the Police said in a statement issued on Tuesday, 4 October 2022.

The police has also placed a bounty on the head of the wanted man.

“In view of the urgency associated with the matter, a reward of GHS2,000.00 has been set aside for anyone who is able to provide credible information that could lead to the arrest of the individual and rescue of the child,” the statement noted.

Reacting to the incident, Child Rights International, in support of the efforts by the Ghana Police, is also placing a reward of GHS 10,000 on the head of “any individual who will be able to provide details that will lead to the location of the individual in question, the person that recorded the video and the individual seated watching the scene unfold.”

It indicated that: “The reward will be provided after such claims have been substantiated and verified by the Police and/or Social Welfare Department as true.”

It stressed: “Numerous children around the world face such abuse daily”, adding: “This is a clear indication of a dent in child protection efforts in the country and must be tackled with all seriousness and perpetrators of such acts must face the FULL RIGOR OF THE LAW.”