GIJ-SRC Elections: Full list of aspirants yet to be vetted 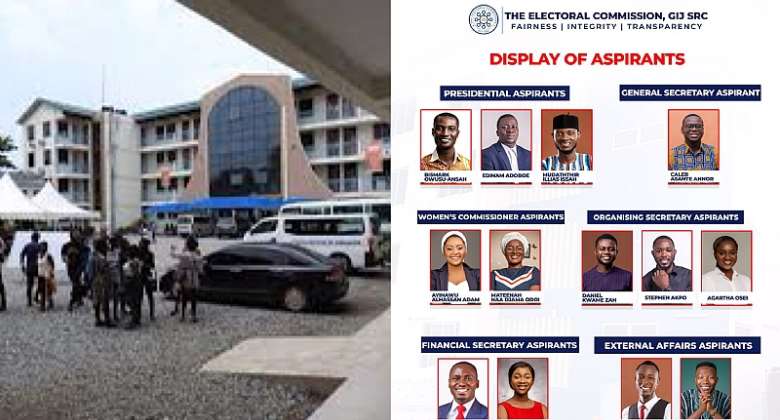 As the current crop of leaders, headed by H.E Edem Vine Dei Tutu, prepares to hand over this semester, the Ghana Institute of Journalism (GIJ) is about to go to the polls to elect new executives of the Students' Representative Council (SRC).

The SRC’s electoral committee, led by Mr. Harley Festus Kwabena, the commissioner, officially opened the nomination forms on Sunday, October 2 for interested applicants to pick forms for the two vacant positions, available at the SRC.

After three days of form picking and filing, thirteen students of the Institute picked their forms to contest the October 11 GIJ-SRC election.

The aspirants who will be vetted on October 6 and 7 are as follows:

Three students have so far shown interest in contesting the lead position of the SRC. The presidency approved by the vetting committee are:

Luckily for him, if approved by the vetting committee, Mr. Caleb Asante Annor will go for an unopposed YES/NO.

The Women's Commissioner race will be keenly contested after the vetting by Ayinawu Alhassan Adam,

For the Organizing Secretary position,

Also, in the financial secretary race,

-Obed King Gaglo and Asantewa Freda Twum are to be vetted.

Another tight competition, which is the portfolio responsible for overseeing students' welfare on an external level, is the External Affairs commission. It will be contested by Job Kwabena Laboja and Osman Abubakari-Sadiq.

If none of the above aspirants for the various positions are rejected, they will fight stiff competition on Tuesday, October 5.