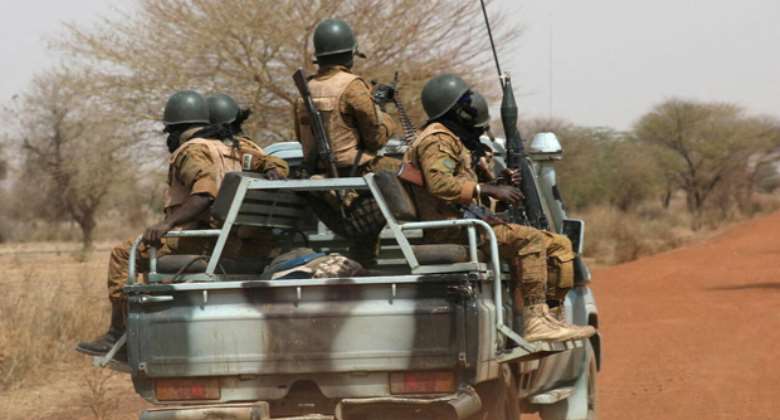 What is happening in neighboring Burkina Faso and other West Africa countries is a good omen for the sub-region. It is sending a signal to the Khaki Boys that gone were the days when they could usurp political power, misrule with iron fists and subdue the populace with their 'soldier power' without any challenge from their colleague soldiers who disagree with them. In fact, it is a clear message to the soldiers that, if you mess up with the democratic dispensation, you do so at your own peril. Another group of soldiers can also strike and the results could be bloody among the rank and file of the soldiers. We, the civilians, can only sit on the fence and watch while two usurpers of power mash it up at their barracks. It is like the war of desert rats. We, the civilians, will have to choose the lesser of two evils. Abi, ino bi so?

The era of military strongmen is gradually coming to an end in Africa and West Africa, for that matter. The civilised world is moving forward and democratic system of governance is winning against silly military adventurers, dictators and the unnecessary spilling of innocent blood in the name of a revolution. The worst democratically elected government is far better than the best military regime. Is Professor Raymond Atuguba and his fellow coup mongers listening? Only a foolish man will choose a military regime over a democratically elected government. It is like choosing nuclear warfare over conventional warfare. Fortunately, leaders of coup d'états in Africa end up dying violently or running away into exile. The few who survive and eventually hand over power to civilian governments live and die with disturbed consciences like 'Asomasi' and his wee-smoking soldiers and cadres, who tormented Ghanaians with his wish-to-be-forgotten two revolutions.

The problem is that these soldiers never learn any lessons from history when they set out in their quest for power. A soldier is trained to fight and defend his nation in times of aggression but the moment the soldier chooses the path of ruling the country, he is in for trouble. In the beginning, he will have the support of a gullible populace because of the fear of his gun and bayonet, but as time goes on, the people become wised up and the situation changes. Opposition political parties too cash in to support the military adventurists, forgetting that when they too come to power, the same adventurists will breathe on their shoulders and usurp power at the time of their choosing. Let there be a coup d'etat in Ghana today (May God forbid) and see how NDC supporters will jubilate.

For eleven good years, Ghanaians lived under a stultifying bloody revolution led by the late JJ Rawlings. We had no Parliament, no Constitution, no Council of State and above all, no voice and no freedom. A culture of silence was introduced and men became women as women run for cover. Loans were contracted without any approval from any Parliament or any debate as to the merit of the loan and what the loan was to be used for. More than three hundred factories built by Dr. Kwame Nkrumah were sold to members of the junta and their cohorts. Projects were sited at where the junta wanted them to be sited. Toilets were built where the people were thirsty because they did not have any potable water and bridges were built where we had no rivers (sic!). For eleven years, the country experienced brain drain as fine, well educated professional men and women did run into exile to seek for greener pastures and safety. Those who dared to stay behind were threatened, forced to work under duress and undue influence because Trade Unions had no say to negotiate on the welfare of workers. Workers who protested and went on demonstration were quickly subdued by the Abongo Boys who exhibited naked 'Soldier Power'. All the three state universities were closed for three years simply because students demonstrated against the regime. Ogyam came preaching Probity and Accountability but at the end of the day, he did not account to anyone and neither did anyone probe his junta before he died. Ewi, Barawo!

Instead of handing over power to civilians, as directed by the IMF where Ogyam had gone for a bailout after eleven years of economic total mess, he metamorphosed into a civilian President, put off the military uniform and donned traditional Northern smocks and custom-made suits to misrule again for eight years. He eventually left behind a ruined economy to be inherited by John Agyekum Kufuor who worked beyond human endurance to steer the ship of state out of troubled waters. Anytime I hear the NDC guys talking about the state of the economy, I begin to think if they ever read about the political history of this country and the role military regimes, including the one which later became known as the National Democratic Congress, where they belong, have contributed to the mess of the economy. Anytime we take one step forward, the soldiers force us to take two steps backwards.

As for Burkina Faso, our immediate neighbors, they have refused to copy from Ghanaians who, at one point collectively, decided that enough is enough for coup d'états and chose democracy as the only way out in a referendum in 1991. Since 1992, we have been able to stay afloat on the rivers of democratic dispensation and we aren't going back. If the new junta leader of Burkina Faso wants to leave behind an indelible footprint on the greenest hills of Burkina Faso, he should immediately set a very short date for transition to civilian rule. He should be keen in supervising a free and fair election, hand over power and retire to the barracks with his soldiers and keep watching how the civilians rule the country. Any attempt he makes to hold on to power, as others did, will spell his doom. He has no option but to subdue the Jihadists, because his predecessor promised and failed, hence the need for him to stage the coup as he told us.

On the other hand, if his intention is to fight the Jihadists and bring sanity to Burkina Faso, where thousands of people have been murdered by these sick brains and return to barracks after achieving his aim, he has my total support. He should be ruthless in this war. The question of Jihads should be settled by blood and iron because that is the only language they understand. No kid-gloves here. Captain Traore should use every tool of intelligence, every necessary weapon of war and every cohesive power of state to the destruction and to the defeat of these enemies of modern civilisation. He should not wait for the terrorists to attack before he sends soldiers to chase them since that is not self defence but suicide mission. Terror must be turned on these terrorists for them to have a taste of their own medicine. Burkina Faso soldiers should rather go after them, chase them from place to place, shoot them on site and harass them until there is no place for them to hide or rest.

The soldiers must also pursue persons who support them and give them refuge. The battleground should be covered with the blood and skeletons of these criminals so that the people of Burkina Faso will live in peace. The military should scout for their leaders and kill them instead of arresting them. They don't deserve to be tried. All these can be achieved within one year if Captain Ibrahim Traore is serious and means business. But come to think of this: Don't you think time is up for Africa to rethink about the establishment of Africa Rapid Reaction Force as proposed by Osagyefo Dr. Kwame Nkrumah to fight these jihadists and other terrorists groups who are disturbing our peace? Bonjour, Capitaine Ibrahim Traore!!!\