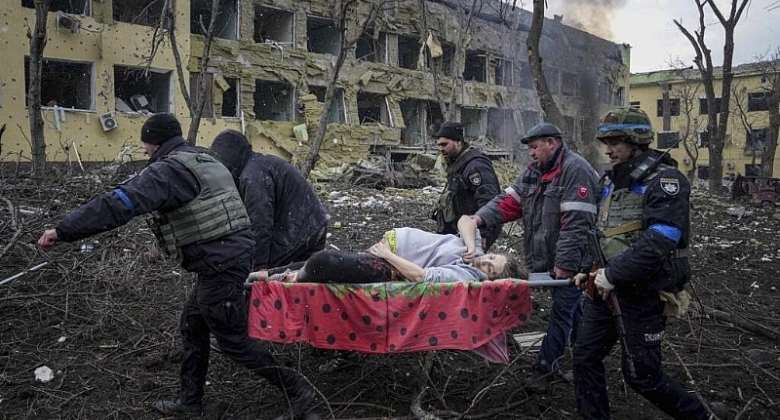 The conflict in Ukraine and the plight of Afghan women are just two topics at the heart of the 29th edition of the Bayeux Awards for War Correspondents, which kicked off on Monday with a series of exhibitions, conferences and screenings ahead of the award ceremony on Saturday. RFI spoke to this year's jury president, German photojournalist Thomas Dworzak.

Dworzak, who headed the Magnum agency between 2017-2020, will have his hands full examining the selection of 51 reports shortlisted from 350 entries, including written press, television, radio and photography.

The Ukraine conflict features heavily among the entries competing for one of the ten awards at the week-long annual event and is at the heart of two major exhibitions and screenings.

Thomas Dwozak knows Ukraine well. He has also visited Russia many times and speaks the language. But he was taken aback by Russia's full-scale invasion of Ukraine on 24 February.

“Nobody I spoke to thought there would be an all-out war. I just thought it would be the usual threats,” the 50-year-old reporter told RFI, explaining that he just happened to be in the country on a separate assignment shortly before the war broke out.

Dworzak, a specialist in the Caucasus, admits there are chilling parallels between the situation in Ukraine today and what he witnessed as a young reporter in Chechnya in the early 1990s, albeit unfolding in a completely different media landscape.

For the 19-year-old at the time, the upheaval in the Soviet enclave of Chechnya was his first big conflict, “the one I felt the most connected to,” he recalls. “Tension has never ended in this part of the world.”

His photographic work there earned him a prize at the Bayeux festival in 2000, opening doors in his career which took him to places like Iraq, Libya, Afghanistan, Iran.

As well as chairing the international jury, he has been invited to host a debate on Wednesday evening which proposes to "illuminate the present" in Ukraine by returning to the two Russian wars in Chechnya (1994-1996 and 1999-2000).

“I recently came across an old publication which had been used to illustrate an article called 'Putin's Wars' from 2000,” he told festival organisers.

“I feel as though I've made my career under the shadow of the leader. He set up an unhealthy relationship with the neighbouring countries. Somewhere between worship of a romantic idea of the Caucasus and fierce repression of any bid for freedom.”

Thomas Dworzak spent over 20 years in the Caucasus, in Georgia mainly, meeting the people, exploring the culture and conflicts in the region, which resulted in the book, Kavkaz in 2010.

Man without a plan

Born in Bavaria, Dworzak saw photography as a way out of a quiet, stilted life. Yet the sensation that war was always just around the corner haunted his youth, the uneasy feeling that peace after WWII was not permanent. Did he go looking for conflict or did conflict find him? Perhaps a mixture of both.

As a photographer, he did not really have a plan, nor did he have formal training. Even today, Dwozak insists that “not being in control” is part of the “magic of the moment,” adding that his advice to young reporters today is to not plan everything down to the last detail.

The man who holds a World Press Prize among his honours is used to being judged, but admits he is slightly uneasy with the idea of having to choose just one photo, or one report, from the high quality material sent in.

“I'm looking for something where I don't feel the photography too much, telling me something new I didn't know.”

An avid supporter of digital technology and social media, he admits to being drawn to how ordinary people document their lives and their surroundings.

After all, you don't need to travel thousands of miles he says – interesting stories can be found (almost) anywhere. The key is to be passionate, curious, and leave a little something up to chance.

The programme for this year's Bayeux week is especially rich, with exhibitions on Haiti, Afghanistan and Sudan, which are open to the public until the end of October, as well as numerous screenings and round-table conferences.

The 2022 edition also features "a return to the fundamentals of journalism" with an exhibition by Hervé Brusini on "the photographic work never unveiled" by journalist Albert Londres (1884- 1932).

As with every year, a new commemorative stone in memory of journalists killed in action will be inaugurated.

The ceremony will take place on Thursday in the presence of the families and colleagues of Maks Levin, the Ukrainian photojournalist "executed" according to Reporters Without Borders by Russian soldiers in March, of Shireen Abu Akleh, the Palestinian-American Al Jazeera journalist  who was shot in May and of Frédéric Leclerc-Imhoff, the French reporter killed in Ukraine.

Dark side of the mine: journalist unearths human cost of smartphones in DRC