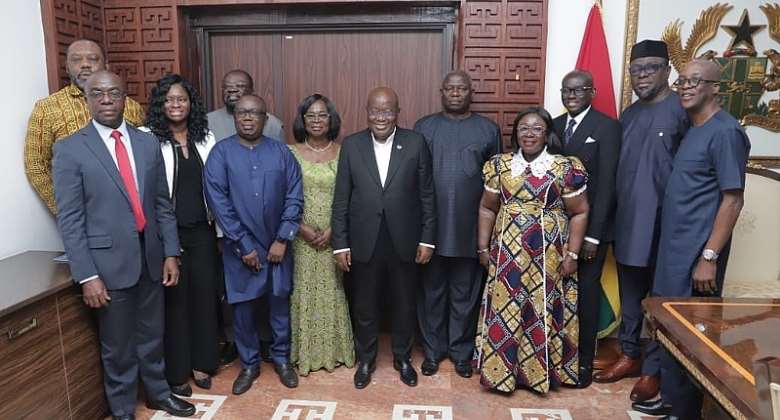 President Akufo-Addo has commended the Board of Directors of the Millennium Development Authority (MiDA), for successfully overseeing the completion of the second Millennium Challenge Corporation Compact with Ghana.

The President gave the commendation when the Board, chaired by Prof. Yaa Ntiamoa-Baidu, called on him at the Jubilee House on Tuesday to present a report on its stewardship and to extend appreciation to the President for the opportunity to work on the programme.

The Board was inaugurated in March 2017 by the President to oversee the activities of the MiDA's.

“We are happy to say that a lot has been accomplished under the Compact,” said Prof Ntiamoa-Baidu.

“By the revised Compact end date of 6 June 2022, all Projects retained and prioritized for implementation had been completed, commissioned and handed over to the beneficiaries, including ECG, GRIDCo, the Ghana Standards Authority, the Energy Commission, PURC, Ministry of Education, Korle Bu Teaching Hospital, University of Ghana, Accra Technical University, KNUST, and University of Energy and Natural Resources, among others,” she said.

Prof. Ntiamoa-Baidu told the President that all the Compact funds, including some USS31 million which Government contributed as counterpart funds, “were fully utilized within the Compact term.”

“All Projects were completed, at very high standards and handed over to the beneficiary Agencies. Numerous employment opportunities were made available to our youth and vital skills were transferred to them.

“We are aware that the Compact’s intervention has had a major impact on the quality of power supply in ECG's Accra East and West Regions. We trust that all infrastructure will be well managed after the Compact,” she added.

President Akufo-Addo who anticipated a third a third Compact with the United States government, said he would call on the outgoing board when the need arose.

“The real issue before me now is compact three, what will be the basis. I am due to travel to America soon and I will raise it at the highest levels,” he said.

The five-year Compact was designed to create a self-sustaining energy sector in Ghana by reforming laws and regulations needed to transform the country's power sector by addressing the challenges in distribution, generation and access to energy in in the country.

So far, the US Government has invested more than US$860 million grant funds in Ghana’s infrastructure development under the first and second compact agreements since 2012.

Projects undertaken in Compact II include the installation of two bulk supply points, one in Pokuase and the other at Kasoa, providing a total of 1015-megavolt amperes (MVA). The two are currently the largest and second largest substations in Ghana.

The second are the installation of two vital primary sub-stations, with interconnecting circuits to serve electricity consumers and major health facilities, namely the 37 Military Hospital, the Greater Accra Regional Hospital at Ridge, the University of Ghana Medical Centre, Noguchi Memorial institute for Medical Research, Jubilee House, and communities in the environs of those facilities.

The third project involves the installation of a refrigerator and air conditioner testing laboratory for the Ghana Standards Authority, the only such facility in the West African Sub-Region and a Low Voltage Bifurcation Project in six districts of ECG’s Accra West and Accra East Regions.

Also, streetlights replacement and refurbishing work on 528km of selected streets in 20 MMDAs in Greater Accra and retrofitting of 7 major government buildings in the Ministries, including interventions at Korle Bu and at the University of Ghana have been undertaken.

The Compact funded internship for some 650 Ladies undertaking STEM Studies in various tertiary, technical and vocational Institutions in Ghana together with the establishment and resourcing of three selected Universities, as training Centres for electricity auditing”.

It also funded the reviewing and passing into Law of 20 Legislative Instruments for Energy Sector Regulations, in addition to providing the ECG with a state-of the art Meter Management and Geographic Information Systems, all of which would support efforts aimed at loss control and improved profitability.

Latest Photo Reports
Catch up with all the political quotes from our politicians.
Advertise here
More from Headlines
ModernGhana Links
No appointee shares his/her payslip, so proposed salaries cut by 30% problematic, doubtful – Gyampo
Government's minor austerity interventions are like cottons thrown at the elephant – Prof. Gyampo
There will be more industrial actions until labor also lives in opulence like the politician – Prof. Gyampo
TOP STORIES