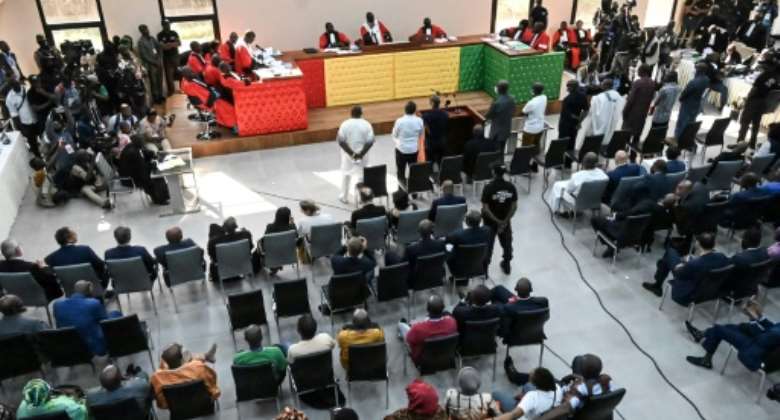 The long-awaited trial over the 2009 stadium massacre began in a purpose-built court in Conakry last month. By CELLOU BINANI (AFP)

A lawyer for jailed former Guinean dictator Moussa Dadis Camara on Tuesday asked the court to place the ex-leader under house arrest during the trial over the 2009 stadium massacre.

Camara and 10 other former military and government officials are accused over the killing of 156 people and the rape of at least 109 women by security forces loyal to the then-junta leader at a political rally in a Conakry stadium on September 28, 2009 and in the days that followed.

Camara, 58, and the other defendants face a litany of charges from murder to sexual violence, kidnappings, arson and looting, and Camara himself is charged with "personal criminal responsibility and command responsibility" over the crimes.

He was jailed on September 27, a day before the long-awaited trial began in a purpose-built court in the capital Conakry. He had returned to Guinea only a few days before after living in exile in Burkina Faso.

But one of his lawyers, Pepe Antoine Lamah, challenged the decision to keep Camara in jail for the duration of the trial over security fears.

Camara is in jail with others including his former presidential guard chief Aboubacar Sidiki Diakite, alias "Toumba", who shot him in December 2009 after the ex-junta leader appeared to blame him for the massacre.

"Whether we like it or not, at one point in Guinea's history, Captain Moussa Dadis Camara led this country, so we must have a little respect," Lamah told the court.

He added that a "villa" could be arranged for Camara but the prosecutor, Alghassimou Diallo, insisted Camara "will be treated like the others".

The court has not yet responded to the lawyer's request.

The hearing began on Tuesday with the questioning of defendants but soon descended into wrangling over procedure.

But the judge was able to ask one suspect, Major Moussa Thieboro Camara, whether he accepted the allegations against him over the massacre, to which he said he would plead not guilty.

A Guinean government spokesman, Ousmane Gaoual Diallo, told AFP in Paris that the trial would last "at least a year to a year-and-a-half" because of the "massive number of victims and thousands of witnesses".