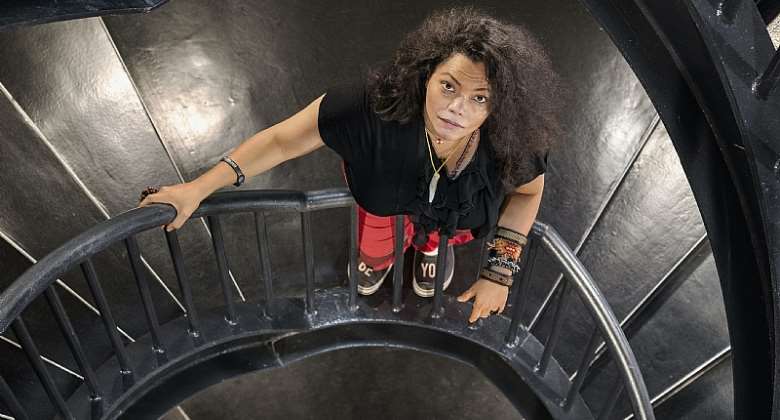 When an artist is welcomed into the monumental interiors of a structure such as the Zeitz Museum of Contemporary Art Africa for a retrospective of their work, it suggests the levels of recognition they enjoy. The gallery, crafted from old dockyard silos in Cape Town, South Africa, opened in 2017. It is built to have such a pedigree; a solid foundation for African artists to gain global visibility and scrutiny.

Tracey Rose is a South African multimedia artist whose practice spans performance, film and video installation, sculpture, photography, print and painting. Such a range is head-spinning. Most artists become distinctive for mastering one or two media at most, but not Rose. Equally impressive is her litany of pet subjects: race and deracialisation, South African coloured (mixed-race) identity, radical feminism, parenthood, post- apartheid South African politics, outrage and shock.

The mid-career retrospective took up all of three exhibition floors of the imposing, six-storey edifice. No such extensive showing of Rose's work had ever been mounted.

The title of the retrospective, Shooting Down Babylon, foregrounds an unambiguous political intent, a continuing debunking of bastions of white supremacy, racial oppression and other structures of global inequality. The reference to Babylon , a famous biblical city, says it all. Rose is shooting holy cows. She rails stridently at the many forms of sociopolitical ills of the world.

At first it might appear that the artist, born in 1974, is a cut-and-dried political artist hacked from the bleak cloth of anti-apartheid struggle. But there is an unexpected twist. Her rebellion spills over into the usual patriarchal sites of dominance; she criticises multiple vices in society as a whole, questioning, questing, denouncing with a considerable spewing of outrage and bile. The Kiss defied racial divides in South Africa. Courtesy the artist/Dan Gunn Gallery, London

The peculiar complexities of colouredness (being of mixed ancestry) in South Africa informs much of Rose's work. But there are also the added difficulties of living through the #MeToo era, pervasive gender-based violence in South Africa, widespread insecurity, social discontent and deep-seated disillusionment with the post-apartheid dispensation. Rose's creative restlessness often mirrors these social anxieties.

The enormous political backdrop of the anti-apartheid movement provides an illustrious tradition. Underneath its intimidating canopy, actors of varied political feathers have found a temporary home; subspecies of good and evil have coexisted, breeding new hybrids and toxins. And, of course, a new generation of rebels.

There is also an aspect of fun in Rose's expressions of outrage. For example, one of her performances, San Pedro V The Wall, takes place at the wall between Palestine and Israel. She appears in pinkish body paint and spotted panties, slinging an electric guitar.

Parading up and down the wall, she hits guitar chords without regard for melody, lost in a world entirely of her own creation. It's a startling piece of agitprop and defiance. She urinates against the wall, baring her bottom as her final jab of the middle finger to a world constructed through injustice, violence and inequality. San Pedro V The Wall, a performance video. Courtesy of the artist and Dan Gunn Gallery, London

Since the New York downtown art scene of the late 1970s and early 1980s we have come to expect shock and outrage from artists. Traces of these histories and developments are evident in Rose's retrospective.

But her art is not all about outrage and defiance. Some of her works could even be called pretty, such as the bright, striking watercolours she made with her young son in which she embraces the child in herself. Here, it's all about innocence and quiet rapture coupled with a childlike wonder.

Her works are generally endowed with an exquisite finish that makes them unexpectedly soothing.

Born in the coastal city of Durban, Rose was educated in South Africa and the UK and currently works as a lecturer at the University of the Witwatersrand in Johannesburg. Her art has a visceral quality that is powerful and immediate, not sanitised by academia. Her first notable act of shock was a student performance titled Shittin' Bullion for her master's degree art class in London where she engaged in an act of public defecation.

In the Ciao Bella series (2001), Rose represents herself as Venus Baartman, based on the historical figure of Sara Baartman , taken from Cape Town in 1810 and publicly displayed as a human curiosity across Europe. The series fits into Rose's focus on imagining a world where race is not a social construct. The climax of the series has got to be the creative (re)enactment of the biblical last supper of Jesus Christ in which some of Rose's characters reappear. An installation view showing the Ciao Bella series. Dillon Marsh/Zeitz Museum of Contemporary Art Africa

The Kiss is a more lyrical affair. It's not just an interracial kiss in a divided South Africa. It's a photograph of a naked and handsome black man with a beautiful, naked white woman lying across his loins. They glare longingly into each other's eyes, a mix of yearning, wistfulness and stirring intimacy. A perfect piece of staged paradise in a world riven with racial bigotry and hatred.

Here, Rose addresses a seemingly intractable social issue with tenderness and simplicity, and without evident cynicism. It speaks to a sense of aesthetics that appreciates the virtues of balance and natural harmony in a much abused world.

Shooting Down Babylon reveals a lot about a major contemporary South African artist. Rose shares her ongoing creative restlessness, marked by multiple multi-media explorations, a lack of patience and frustrations with a world gone awry, and pockmarked by social ills and oppression.

Part of her work seeks to reflect and encapsulate these oppressive dynamics, another part celebrates a quest for quirky beauty and simplicity. Yet another facet eulogises innocence's whimsy and lack of complicated adornment.

And finally, Rose proclaims unabashedly the necessity for individual freedom and evolution. It's indeed a journey through several states and emotions; rage and repose, profanity and sublimity, complexity and simplicity. And through it all, Rose bawls out her self-evident right to be inexorably human.